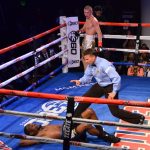 Even without looking for a knockout, Serhii Bohachuk put an exclamation point on another dominant performance Sunday night.

Bohachuk dropped Tyrone Brunson three times before the fight was stopped in round four at The Avalon in Hollywood, California. With the victory, Bohachuk improves to 16-0 (16 knockouts).

The hard-hitting junior middleweight has obliterated his opposition, including the likes of Freddy Hernandez and Cleotis ‘Mookie’ Pendarvis. In his last bout on July 28, the 24-year-old knocked out Fernando Marin of Mexico in the third round.

Brunson was considered a significant step-up in opposition and a dangerous opponent because of his high knockout percentage. The 34-year-old entered Sunday’s fight having only lost once in eight bouts. Bohachuk, who is originally from the Ukraine and now resides in Big Bear Lake, California, was the more effective fighter during the first two rounds, throwing and landing more as Brunson was more deliberate with his punches.

With about a minute left in round three, and after Bohachuk began to close the distance, Brunson was dropped by a counter right hand to the head. Brunson was not visibly wobbled as he got up, finishing the round.

Bohachuk, who is trained by Abel Sanchez, dropped Brunson again with a right cross about a minute left in round four. Brunson was visibly hurt and got up on shaky legs, but fought back valiantly. Moments later, a right uppercut dropped Brunson a third time in the fight, prompting referee Thomas Taylor to wave the fight off at 2:50.

None of Bohachuk’s fights have gone past the fifth round. He was hoping Brunson would give him more rounds Sunday night, but to no avail.

Montoya, who is originally from Puerto Peñasco, Mexico and now lives and trains in Oxnard, was the aggressor from the opening bell. His ring generalship gave Rubalcava problems early on, but Rubalcava momentarily stunned Montoya in round four. Rubalcava (11-2, 7 KOs) let his hands go more during the final two rounds, but Montoya landed the more-effective punches during several exchanges.

Middleweight Arman Darchinyan was successful in his pro debut, knocking out Kendall Mayes-Taylor (0-2) at 1:26 of the second round. Darchinyan is the nephew of former multi-division world titleholder Vic Darchinyan.