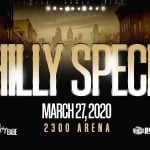 The phrase “Philly Special” means a lot to Michelle Rosado. Not only is she carrying out her vision and goal of promoting fights, she is doing it in her hometown.

This card will be headlined by an intriguing crossroads clash between Philadelphia fighters Damon Allen and Steven Ortiz. The 10-round lightweight bout takes place at the 2300 Arena in Philadelphia.

Rosado will be promoting a card for the third time at this popular venue. She intends to continue her vision of putting together evenly matched bouts between Philly fighters that will attract fans and keep them coming back.

It worked well in the last fight card she promoted on October 4, drawing a standing room-only crowd. And Rosado is confident another large crowd will attend the Allen-Ortiz fight.

“Stevie Ortiz versus Damon Allen shapes up as the most appetizing match scheduled so far this year in the Philadelphia/ Atlantic City area,” Rosado told The Ring in a recent interview. “They are going to meet in the center of the ring and have at it.

“Philly fighters don’t back down; they are gritty, they don’t stop fighting until the final bell; they get up when they get knocked down. They’d rather be carried out than quit. This is the type of fight that made Philadelphia a legendary fight town. Kudos to the two fighters for not coming up with excuses.”

“They know each other through the amateurs. Stevie knows Damon can fight. Damon knows Stevie can fight. There’s a mutual respect between them. Around the Philly gyms, I hear Stevie is going to win, I hear Damon is going to win. This is a perfect indication that it’s a competitive matchup. The 2300 Arena will be rocking on March 27.”

Allen (16-1-1, 5 knockouts) last fought on October 25, defeating Dieumerci Nzau by unanimous decision over six one-sided rounds. That victory took place 14 months after he suffered his only pro defeat at the hands of the unbeaten Jonathan Navarro in August 2018.

The 27-year-old is now being trained by Brian “Bomac” McIntyre.

Ortiz (11-0, 3 KOs) is coming off a hard-fought majority decision win over Alejandro Salinas on September 20.

In a clash of unbeaten heavyweights, Elvis Garcia Munoz (8-0, 5 KOs) of Mexico will take on hard-hitting Sharet Delgado (8-0, 7 KOs) in an eight-round bout. Delgado is originally from Humacao, Puerto Rico and now resides in Berlin, New Jersey.

Christopher Brooker (14-7, 9 KOs), a Philadelphia gatekeeper who has fought at super middleweight and light heavyweight, will square off against Brazil’s Isaac Rodriguez (25-3, 20 KOs) in a six-round bout.