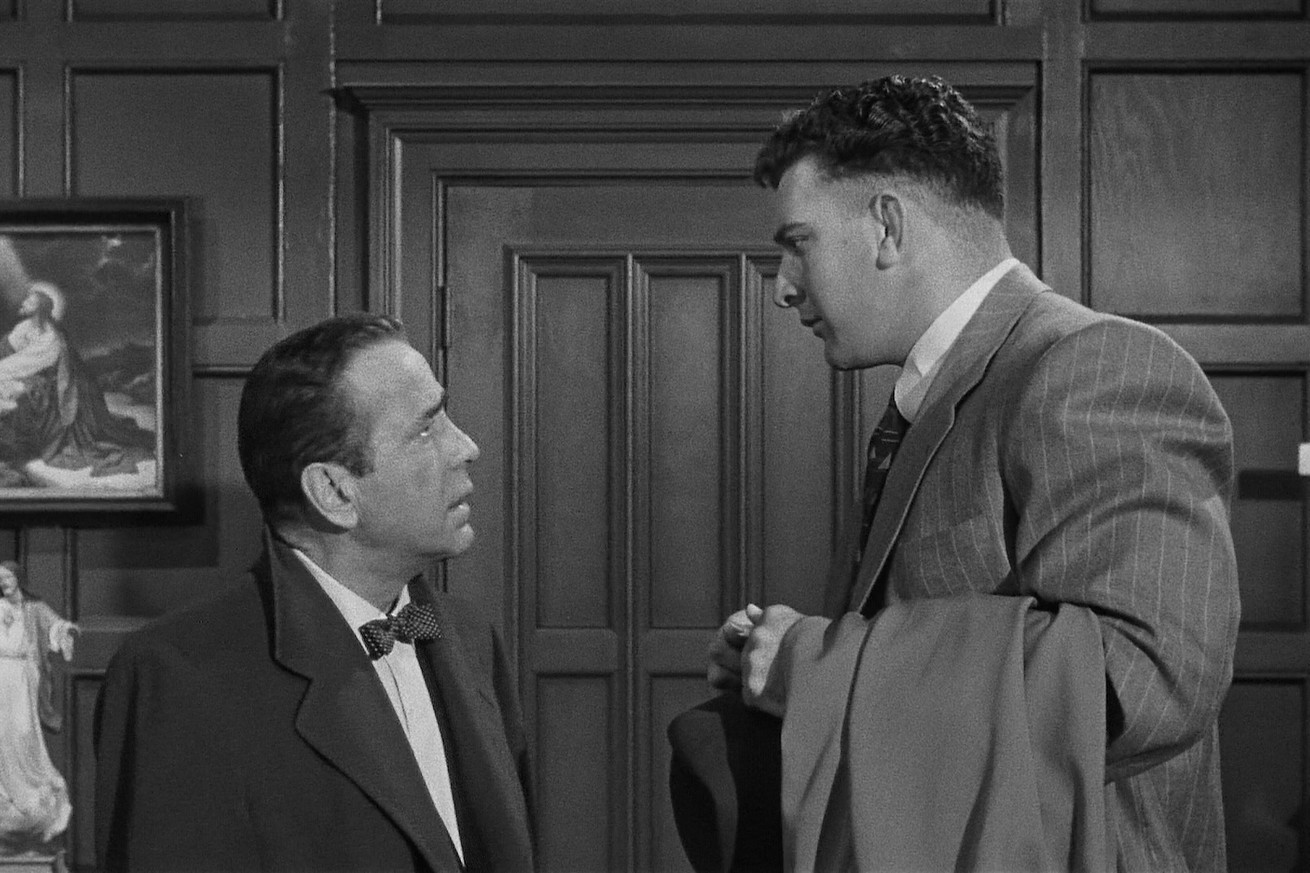 Bogart’s final film is the subject of our first boxing movie review here during this downtime for the sport itself.

As you’re well aware by now, the boxing world is on hold due to the COVID-19 pandemic across the world, and we at Bad Left Hook are looking for various ways to keep the show going without any actual fights to cover at the moment.

Another addition to the rotation on the site will be a look at some boxing movies. Like the sport itself, boxing has a rich history in film. I’m something of a movie buff, I suppose; I wouldn’t call myself an expert, but I watch a lot of movies. In all honesty over the last 14 years of running this site, my interest in boxing films has waned to a degree, because I spend the bulk of the rest of my life thinking and talking and writing about the sport. Still, I’m getting older and my hobbies fewer. I’m no film reviewer by any means, but I’ll do my best, and hopefully these movies will be something we can talk about.

And at any rate, now is a great time to dig into some movies about the sweet science. I’ll be talking about some I’ve seen before (some many times), and some I haven’t. We’ll start with one I haven’t: Mark Robson’s 1956 film The Harder They Fall, starring Humphrey Bogart and Rod Steiger, among many others.

The movie is available for rental and purchase through Amazon Prime.

“The fight game in this country is fallin’ apart,” crooked boxing promoter Nick Benko tells former sportswriter Eddie Willis. “The boys are all gettin’ too smart. They all wanna go to college, they wanna become doctors, they wanna become lawyers, they don’t wanna fight for a livin’.”

When Willis lays eyes on Toro, he’s astounded, and with good reason. Lane was billed at 6’8” and 275 pounds, which even now would make him a giant. But as soon as Willis, Benko, and Benko’s cronies watch Toro spar with George (Jersey Joe Walcott), a former fighter now in his 50s, it’s clear that the kid simply can’t fight. He can’t punch. He can’t take a shot.

“I can get a million bums that can box,” Nick says, “but Toro’s got it in him to fill a stadium.”

Eddie, despite his principles, needs (and just as important, wants) the money, so he takes the job from Benko, a slimy man he intensely dislikes, even if he’s able to have a civil enough conversation with him. He trades on his credibility to sell Toro as a legitimate fighter on a trip out to California.

Can he box? “He’s no Gene Tunney,” Eddie says. Can he punch? “Not like Jack Dempsey,” Eddie says. Eddie turns to a supposed toughness as Toro’s true strength. “He’s got an iron jaw and a cast iron stomach, not a man alive can hurt him,” Eddie boldly lies.

His first fight in California is an obvious con job with an uncooperative patsy. When it is stopped early, there is booing and garbage raining in from the audience. From that point on, Eddie is put in charge of Toro’s tour of fixed fights if he can fix things with the California commission, which he does.

We see Toro in a montage battering opponents on the take, which he’s blissfully unaware is the case. He runs into some trouble in Oklahoma against a Native American fighter named Chief Firebird (Abel Fernandez), whose tribe have come to the event, making him question whether he can take the dive with his pride at stake. The “chicken wire routine” is suggested, and Firebird goes along with it, preserving his pride while slicing his mouth all to hell.

As Toro tours the country on his personalized promotional bus — which boasts that it’s carrying the “Fighting Sensation of Two Continents” — we begin to see how sadly pathetic he is. Though hulking, he is feeble, and proves incapable even of defending himself against Nick’s playful jabbing during a photo opportunity. When asked at a private meeting with “punched out” former champ Gus Dundee (Pat Comiskey) what Toro really has, Eddie admits, “He can stand up if you don’t press him too much.”

We are guided, of course, to a showdown with the world heavyweight champion, Buddy Brannen (former real champion Max Baer, who can actually act a little), and we get a dramatic conclusion to the story after that encounter. (There were actually two endings shot for the film, one a little more drastic on what should be done about boxing, but most copies available now, including the version on Amazon Prime, feature the lighter conclusion that suggests the government should investigate the sport.)

Bogart, who was dying of cancer while shooting and would pass away in 1957, is as strong as he can be in his final film role, but just about every scene with Steiger is owned by Steiger. His slick talking, heartless boxing promoter is a bit over the top, of course, because it’s a dramatic film. But there is enough truth in the character that you come to really hate the man. He is closer to evil than simply disagreeable.

Speaking of truth in characters, it’s always been figured that Schulberg took a lot from Primo Carnera, the pro wrestling and boxing star whose pugilistic career has always been fascinating. Carnera, in fact, sued Columbia Pictures for $1.5 million, claiming the film was based on him. He did not win the case.

Rating: 3.5/5. I guess I should make clear that 3.5/5 is, to me, a “very good” movie, to put it as simply as possible. Robson’s direction and Yordan’s screenplay are solid, and Burnett Guffey’s cinematography was nominated for an Oscar. Bogart certainly had greater roles and more iconic, healthy performances, but this is not a bad way to close a legendary career. Steiger is brilliantly loathsome, and the supporting cast all carry their weight, including the ex-fighters who all do as good a job as you could hope or better. It does have some of that stilted acting and writing that was more of the style at the time, but it’s hardly the worst example of that; simply that compared to more modern fare, it is present here, as it would be, this being a 64-year-old movie and all. The fight scenes are pretty brutal by the standards of the day and nicely shot, if you’re interested in the boxing action itself.