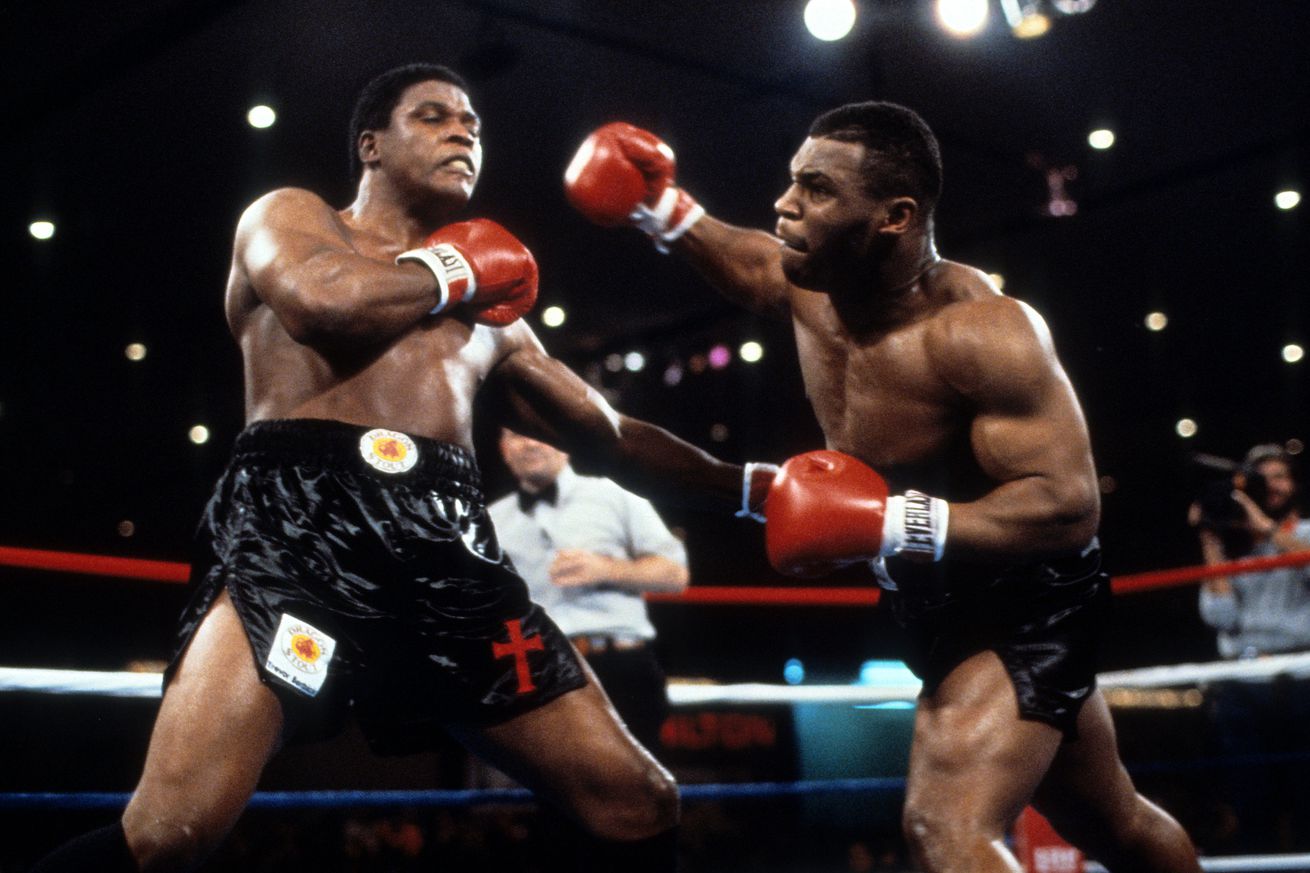 It was Nov. 22, 1986, when a 20-year-old Mike Tyson challenged Trevor Berbick for the WBC heavyweight belt.

Mike Tyson has never been my favorite fighter, though I’m of an age where he easily could have been, at least as a little kid. Michael Jordan was never my favorite basketball player, either, a fact that routinely shocks people I’ve met and become friends with as an adult, because while I’m not from Chicago, I’m from the greater Chicagoland area, and it was, make no mistake about it, a Bulls fan region in those days. Still is, really, although for obvious reasons the fervor has certainly died down.

But there’s no question that Michael Jordan was it, either. I knew it as a kid and it’s even clearer in hindsight. And in those days in the 80s and early 90s, Mike Tyson was it in boxing, a true mainstream sports phenomenon and superstar, who had come along to claim the heavyweight throne that had been passed in the public’s mind from Muhammad Ali to Larry Holmes, and in some ways to much of the public, it was really going straight from Ali to Tyson, as Holmes, while no question a great fighter, was never the star that Ali had been, and the public thirsts for stardom, particularly in the heavyweight ranks; we mostly love larger than life characters, iconic personalities, along with great ability.

After a good amateur career that didn’t quite reach the highest heights, Tyson turned pro at age 18 in March of 1985. By the end of that calendar year, he had smashed his way through 15 opponents inside of four rounds, with 10 of them not getting out of the first three minutes. In his final fight of the year, he was taking his first 10-rounder, not that it mattered much — opponent Mark Young would last just 50 seconds with the ferocious fighter from Brooklyn.

After four more wins early in 1986, he went to a pair of decisions with Jame Tillis and Mitch Green, winning both over 10 rounds. It gave him some valuable experience in going deeper into fights and facing guys who didn’t crumble early. Through Sept. 1986, Tyson had added another 12 wins, 10 by stoppage, to run his record to 27-0 (25 KO), at which time it was decided that the 20-year-old Tyson was ready for a world title shot.

That fight came on Nov. 22 at the Hilton Hotel in Las Vegas, where Mike was matched against 32-year-old Jamaican Trevor Berbick, the WBC heavyweight titleholder with a career record of 31-4-1 (23 KO).

Berbick had his first title shot back in 1981, losing a clear decision to Larry Holmes at Caesars Palace. Later that same year, he put an unfortunate 10-round beating on a terribly washed-up version of Ali, who at 39 had been through way too many wars, and it was clearly showing. Ali hadn’t even fought for 14 months, following a brutally one-sided loss to Holmes of his own.

But the win in Nassau against Ali gave Berbick a level of name value that he’d be able to trade on for a while. He didn’t do much with it in the short term. While he did win the Commonwealth heavyweight title in 1982 from Gordon Racette in Canada, he lost back-to-back fights in 1982-83 against Renaldo Snipes and ST Gordon.

In March of 1986, though, Berbick was riding an eight-fight win streak, and got another shot at the WBC belt. That night, he upset previously undefeated Pinklon Thomas to win the green strap.

That victory put him squarely in Tyson’s sights. Berbick was no world-beater; certainly a solid fighter, and him picking up a piece of the world heavyweight title made him very attractive for a guy everyone was hoping could become the next great heavyweight champion of the world.

It also gave Tyson a chance to break Floyd Patterson’s record and become the youngest world heavyweight champion of all time.

The fight made sense, and it was going to make dollars, so it was made reality.

Young Tyson was, as usual, giving up some on-paper physical advantages. At 5’10”, Tyson was always a short heavyweight, and the 6’2” Berbick had not just height but seven inches of reach on his opponent.

Striding to the ring on fight night, no entrance music, no 40-pound costume, Tyson is all business. In these prime years of his, there is nothing behind Tyson’s eyes when it’s time to get down to fighting. Almost an emptiness. He is entirely focused on the task at hand, and to him, the task is raining destruction down on his opponent.

Berbick walks to the ring pumping both fists out, looking around at the packed crowd, as Col. Bob Sheridan notes he was an ordained minister, nicknamed “The Soldier of the Cross.”

“He’s had a little distraction leading up to this fight,” Sheridan also points out. “He was sued by a Texas boxing promoter just a week ago, had to go down and testify in court because he backed out of a fight. Of course he backed out because he’s getting $2.1 million for this one.”

Berbick has also just taken on a new trainer, going with the legendary Angelo Dundee after winning the belt with Eddie Futch in his corner. Tyson at this point is still training under Kevin Rooney, with whom he was at his best as a pro.

Being introduced by the ring announcer, Tyson seems all but oblivious to the somewhat reaction from the crowd, mostly cheers but a few boos in there, too. He simply paces in his corner like a caged lion, ready to be unleashed, and ready to do some damage when he is.

A similarly mixed reaction meets Berbick, and when the two meet mid-ring with referee Mills Lane, they look one another up and down and tap gloves, ready to fight.

Tyson doesn’t sprint from the corner, but he is ready to do damage immediately, throwing lead right hands and showing he intends to lead the dance. A grazing right from Tyson is nonetheless thudding, and Berbick realizes quickly that he isn’t going to be able to jab and keep distance here. He has to get ready to bang.

Tyson fires off a hard left hook, landing it and getting Berbick’s attention even further. Another right hand comes in behind the ear. Berbick, clearly feeling the heat, tries to push Tyson off, and then tries to tie him up a bit in close. And clearly, he is feeling the power, too.

Another right comes in from Tyson. Berbick now has little to nothing coming back.

“That’s the fear factor,” Sheridan says on commentary. “He’s away from his bravado in the early going of this round.”

Tyson stays in close with Berbick, the two leaning into one another. Berbick throws and misses a wild left hook when they get distance again, and it leads to a combination from Tyson, ending with another left hook, sending Berbick stumbling about. Tyson starts firing away, and the crowd gets loud for it. They know what they’re seeing. The bell ends to end round one, and while Berbick mugs at Tyson when they walk to their corners, the ultimate outcome here is looking pretty obvious.

Tyson marches right to Berbick again to start the second round, and Berbick isn’t ready for it. Berbick hits the canvas hard, not on any one particular shot, but just getting overwhelmed by the aggression of Tyson.

Berbick pops up quickly, in that way you’ve seen fighters do many times, when they probably should have stayed down a couple more seconds to gather themselves, but what’s happening is happening to them so quickly that it probably just doesn’t enter the mind at that moment. Instead of remaining calm and taking a deep breath, Berbick is panicking here, because it’s become increasingly clear that there’s simply nothing he can do to keep this guy at bay.

After a count of eight, Mills Lane signals the fighters to resume. Berbick, still feeling the effects, keeps trying to keep Tyson off him, but with shoves instead of a jab or really any other offense coming back.

Tyson isn’t overly aggressive here, mind you. He’s looking for the openings, and then he’s throwing when he thinks he sees something. He goes to the body, and then up top with the right hand. He and Berbick get in tight, tangled up by their arms, and Tyson seems even in that position to be actively thinking about the next move. When he gets a little room, he’s still popping his own jab out.

Then, it happens: right to the body, and while the right uppercut Tyson loved to throw behind that shot misses, the left hook behind that doesn’t. Berbick goes down again. His legs are gone. Berbick, despite his best efforts, simply cannot get up in time, or with anything resembling steady legs.

As Mills Lane embraces the beaten Trevor Berbick, Mike Tyson walks calmly back to his own corner with something of a shrug. At 20, he is the new WBC heavyweight champion of the world. He does his best to give his respect to Berbick, but Berbick is still somewhat out of it, and certainly not happy.

“Mike Tyson is for real,” Sheridan says. “And he is the WBC heavyweight champion of the world.”

Tyson, of course, would go on to reach the mountain top as a professional. He’d add the WBA belt next time out with a wide 12-round decision win over James “Bonecrusher’ Smith, and then the IBF title in Aug. 1987 with another decision win over Tony Tucker. A few months after the win over Tucker, Mike Tyson’s Punch-Out!! was released for the Nintendo Entertainment System, becoming a classic video game that sold over a million copies.

Everything eventually came crashing down. His personal life went into turmoil. He was shockingly upset in 1990 by Buster Douglas. And it got worse from there.

When we last saw Mike Tyson in a boxing ring in 2004-05, he was a shadow of his former self. It was one thing for Lennox Lewis, a great fighter, to beat an aged Tyson down in 2002. It was altogether different to see a mentally depleted Tyson knocked out by Danny Williams, or quit after six rounds against Kevin McBride.

In his time, Mike Tyson took the world by storm. Of the win over Berbick, Donald Saunders wrote, “The noble and manly art of boxing can at least cease worrying about its immediate future, now that it has discovered a heavyweight champion fit to stand alongside Dempsey, Tunney, Louis, Marciano, and Ali.”

Tyson wasn’t really ready for all that came with the fame and fortune, the manipulations and pitfalls of it all, and his path turned very dark over the years. Tyson himself has talked openly about much of that, many times over now.

But now that Mike seems to have found some peace in his life, you’d like to think he can now look back on some of these nights — like this one — and find some joy in it all, as fight fans have for so long.

Tyson vs Berbick is available to stream via ESPN+