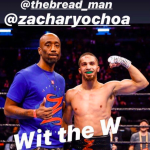 It was unexpected, I did a double take when I looked into the ring at Barclays Center March 7, as I watched the undercard for the Adam Kownacki vs Robert Helenius main event in Brooklyn, NY.

There was the Brooklyn kid, Zachary Ochoa (click Boxrec here), a young vet who has been up, nearing getting-out-of-prospect status to contender-hood, then took an L, then bounced around some in that strange world that can torture fighters as much as the fighting, promotional issues.

He was with Golden Boy, which was nice, but that’s a West Coast firm, and their East Coast fighters sometimes find themselves out of sight. He then hooked on with now incarcerated promoter Greg Cohen, and was excited to get back to being busy, but the wheels spun in place and so he’d been on hiatus, and was pumped to be back trading.

Across the ring from Ochoa that night stood Angel Sarinana, a Mexican hitter with a 10-9-3 record that might have deceived casuals, but not so much a fight game vet. Or a young lifer like Stephen “Breadman” Edwards, the trainer we’ve seen cornering Julian ‘J-Roc’ Williams, who was standing behind Ochoa as the 27 year old sought his 21st win.

October 6, 2018, that was the last time Ochoa had rumbled for real, against Daulis Prescott, in his fourth tussle since losing to Yves Ulysse. Zach had showed the heart of two lions in hanging tough against Ulysse, who was at A plus level at Turning Stone Casino in Verona, NY. So, he had a bigger brand of butterfly rumbling in his gut as he waited the round one bell to ring in his home borough. Edwards stood, silent, mostly, he’s not a loud rah-rah type, he offers some quiet reassurance and a steadfast demeanor which can give a boxer a lift by osmosis. He has a baby face, but Zach Ochoa is 27. He knows it, he gets it, that the time is now to reach his topmost potential. So, the pairing with Breadman Edwards could be positively crucial.

“He had a tough fight…I’m very proud of Zach,” Breadman told me during a hit on Talkbox. “Hopefully, I can get a couple more fights with him, he’s not rushed into a big fight, because I have some more work I wanna do with him. In this day and age, with disrespectful young guys, this kid, he listens, he came down to Philly for five weeks, got an Air B n B, was in the gym every day, woke up every morning, 5:30 in the morning to do his run. He sent me his weight every single morning, the only thing he’d do, was go out the house to go food shopping, I could train a kid like that till I’m 80, Mike. It’s the kid that knows every thing, you gotta deal with a bunch of other stuff…And the number one thig, he gave me his phone the week of the fight! These phone! These kids, you’ll be wrapping your hands and they wanna be looking at the phone! This kid, it’s just very refreshing. Now, he needs a lotta work, but he’s willing to put the work in.”

Vladimir Lik was ringside for NYFights, and this is how he described some of that Ochoa return to the ring:

The 27-year-old Ochoa dug down deep into his Puerto Rican and Brooklyn roots to fend off a wild Sarinana, who wanted to brawl. The Mexican fighter caught Ochoa with a looping right hand which stunned “Zungry” at the end of the second round. Ochoa came out energized in the third round hurting Sarinana right back and opening up a cut over his right eye.

The two men brawled in the center of the ring in rounds four and five with Ochoa getting the better of the exchanges with his solid technique. The fight became sloppy at times when Ochoa seemed to tire and Sarinana was trying to land a home run with ever wild swing. Both men let it loose in the eighth and final round with each getting in huge looping rights on the other much to delight of the crowd. Ochoa enjoyed the home cooking and hometown support in his fifth appearance at Barclays Center.

Edwards gave his take on this win.

“His opponent had a funny record, upside down, but he was a tough guy…Now, Zach has heart for days, but Zach gotta realize that the brain and the mind last longer than the body, and he has to use his head more. And once he understands that, he’s gonna be formidable for the guys at 140! I’m very proud of the kid, and I like him a lot. The type of person he is, he’s very enjoyable, very easy to train, very easygoing. Boxing is very hard, you can’t have a fighter who’s fighting you, fighting everything you say, fighting everything you do. Fighter that you can’t trust, doing things behind your back, always creating another issue…Because you’re already fighting the system, you’re already fighting your opponent, the things you don’t have control of. The one thing you do have control of is the relationship you have with the fighter, the relationship he has with you. And I don’t know if I’ve ever enjoyed a kid more than him, he was one of the most enjoyable training camps and kids I’ve ever been around.”

Bread admitted he’s really hoping this works out: “He’s a great kid, 140 is a tough division. And he needs work, I don’t have Alexis Arguello right now..but the kid can fight. He has some things you can teach, and he has some things you can’t teach. He can fight, and hopefully I can just get a little bit more time before those big names come calling.”

This time frame we are in, it is helping some people realize it might be better to make some of this mega bouts sooner, rather than later, because tomorrow is not promised to us.

My three cents: So much of what is swirling through my head is, of course, the present, adapting to a new brand of day. But also, the future: How this pandemic, the effects of which are just starting to be felt, from an economic standpoint, will play out. How will this change people? Will people come out of this with changed values? Like, will more trainers decide, hey, tomorrow isn’t promised. Live for today–and to that end, I’m not going to put up with working with prima donnas and punks. Only good people.

We shall see how it plays out, for that pondering, and for Ochoa, who is 27, and perhaps heading into his physical peak.