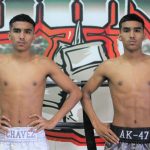 It was the bench of solitude. The black wooden pew rested against a wall of Richard Barrientes Jr.’s burgeoning Pound4Pound Boxing Gym and often elicited derision. Either one or the other would sit there, their head down staring at their feet.

The rule was simple: Train and take it seriously, or sit down and watch.

And when one twin was banished “to the bench,” the other didn’t let them forget it, with a sideways snarky remark as they went by.

It’s led Chavez and Angel Barrientes to where they are today—standing in the wings as the next set of twins to rock the boxing world.

They’re both 17. They’re both staggering 5-foot-11 junior featherweights with extensive amateur backgrounds. They’re both 2-0, with two knockouts. Chavez, who is older by 13 minutes, is known as “The Beast,” while Angel is known as “AK-47.” They’ll turn 18 on August 3 and will be featured on future PBC undercards.

Richard, their father, is their trainer and Bob Santos, the venerable Northern California boxing manager is handling their budding careers.

Currently, they’re seniors in high school, because Richard wanted that. It was important to him that the boys have girlfriends, go out with friends and go to their proms, that they live like regular teenagers—with the underlying current of boxing discipline at the core.

Richard did not want that happening to his twins, who are half Filipino and half Mexican. They were born in Hawaii, and were two when Richard moved the family to Las Vegas, where he began the Pound4Pound Gym. Chavez Barrientes is 13 minutes older than his brother Angel. Photo by Kyte Monroe for Team Barrientes

The family comes from a martial arts background. Richard sparred as a child, though never competed.

“I was always a big boxing fan and it’s why I named my son Chavez, after Julio Cesar Chavez, because I wanted my boys to be involved in boxing,” said Richard, the father of five, two daughters and three sons. “I wanted boxing to be fun to them, so we did fun stuff at home, getting them interested in the sport.”

Their ring was the family living room. They went at it wearing gloves that were as large as they were in front of the TV. Richard was hoping the twins would gravitate to the sport.

But, Richard stressed, after the gloves were off, no more fighting.

As the boys got older, Richard received a suggestion from a friend about opening a gym of his own.

“We opened the gym and I went to a few amateur shows and found out the politics of amateur boxing,” Richard recalled. “I saw the scoring system and I learned from there what the judges looked for and the things that win tournaments.”

Chavez and Angel embraced boxing immediately. Richard had a lot to do with that. From the ages of 7 to 10, Richard was admittedly tough on the twins. He had them running and doing foot work, and then he saw them grow tired of the sport.

“I didn’t want them to hate boxing, so instead of wanting them to do more, I had them do less and see if they still wanted to box,” Richard said. “Me and my wife gave the boys a choice. If they went to the gym, they would do work. If they were playing around on the bag, I would tell them to stop it and get on the bench and watch everyone work out.

“Sooner or later, they would get in trouble and they began asking me if they could hit the bag, and I told them to go sit back on the bench and watch everyone work out. Sometimes, we would go to these tournaments, and would tell them, ‘Now, that kid you were going to fight, they’re working out right now, and what are you doing? Sitting and watching. Who do you think is going to be ready, them or you?’ Angel Barrientes is the more vocal of the twins. Photo by Kyte Monroe for Team Barrientes

“When I was getting Robert Guerrero ready for the Michael Katsidis fight (in April 2011), Robert worked out in Richard’s gym,” Santos recalled. “The twins were around nine, 10 years old. There wasn’t a day when we didn’t see those kids in the gym working out. As time went on, (boxing publicist) Mario Serrano would let me know the twins won another tournament.

“I kept an eye on them, but what is the chance someone is going to be something at that level? When I was getting Erislandy Lara together for his last fight in Ismael Salas’ gym, I saw the twins again sparring really top guys like two-time Cuban gold medalist Robeisy Ramirez. They were really putting it on him.

Guerrero told Richard that Santos was the man to manage his sons. Richard signed with Santos in January 2020.

“At the end of the day, boxing is a business, and I’ve seen the best,” Santos said. “These kids can compete against anyone. These kids really have an opportunity to be great, great fighters. They remind be a little bit of Mario Barrios, someone tall and lanky who can punch. They’re much more polished than Mario at the same age.”

Both twins are articulate and carry a maturity that belies their age. Though Chavez is the older twin, Angel acts more like the “big brother.” They resemble each other, but there are differences. Chavez is on the quiet side, while Angel is more vocal.

When they were younger, they used to play tricks on people because they look so much alike. They both fight out of a conventional stance, although Chavez is a natural lefthander.

“I think we’re successful because we push each other so much,” Chavez said. “The last time my father allowed us to fight was two years ago. My dad doesn’t allow it, because try and kill each other. I’m bigger, but you can tell who’s who in the ring.

“I won’t say he beat me last time we fought. But Angel is cockier than I am. He’ll say all of the time that he won. And it’s not easy being a twin. When Angel gets in the ring, I’m more nervous than he is, and it’s the same way with him.

“We always look out for each other.”

Angel recalled the black, wooden bench with little fondness. He remembers the times he was forced to watch.

“I hated it,” Angel recalled. “I hated sitting on that bench. It was usually one or the other, though. If one wasn’t working, the other was on the bench.

“Oh, I let Chavez know the times he had to watch. It’s been a while since we sat on that bench.”

The post Meet Chavez and Angel, the Barrientes twins appeared first on The Ring.