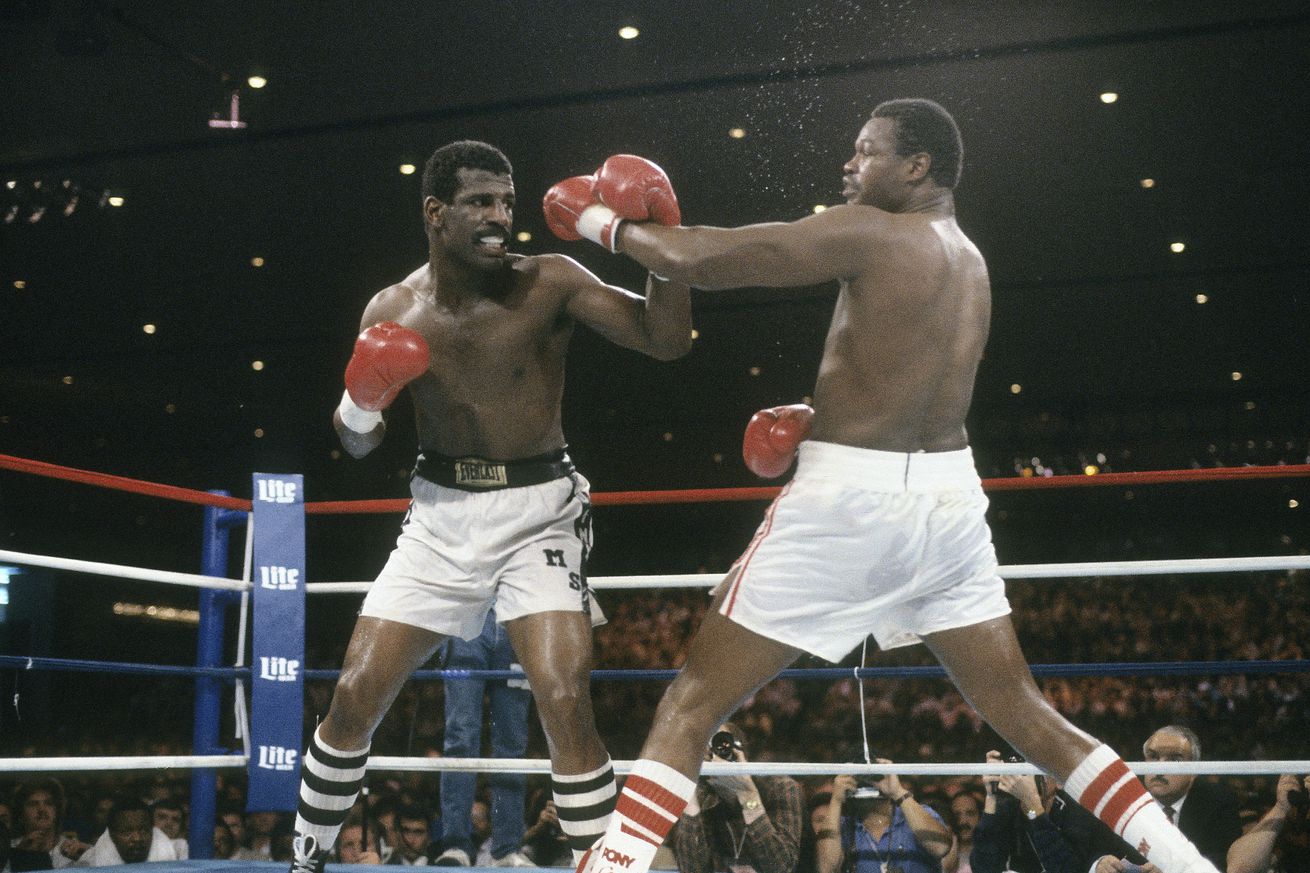 Michael Spinks climbed up from light heavyweight to deal Larry Holmes his first professional defeat, landing the 1985 Upset of the Year.

On September 21, 1985, a 35-year-old Larry Holmes and the undisputed light-heavyweight champion Michael Spinks both put their unbeaten records on the line inside Las Vegas’ Riviera Hotel & Casino.

Larry Holmes had toyed with retirement over a previous couple of years. “The Easton Assassin” had succeeded in nineteen heavyweight world title fights before deciding to duke it out with Spinks for a reported $3 million.

A unanimous decision over Carl Williams just four months prior put Holmes on the cusp of Rocky Marciano’s infamous 49-0 record; one more victory would see him tie Marciano’s accomplishment and Holmes couldn’t resist the accolade.

No. 49 would be Michael Spinks. “Jinx” had gone 27-0 as a professional, unifying the light-heavyweight division against Eddie Davis in 1984 and defending the IBF, WBA and WBC belts twice against David Sears and Jim MacDonald. The 29-year-old was stepping into the unknown territory of the heavyweight division, looking to become the first 175-pounder to defeat a heavyweight for a version of the world title.

Many greats had tried and failed before. Rocky Marciano stopped Archie Moore in 1955; Joe Frazier and Muhamad Ali stopped Bob Foster in 1970 and 1972, respectively; Joe Louis stopped Billy Conn in 1941 and 1946 all enforcing the old boxing adage that “a good biggun will always beat a good littlun”.

Michael Spinks would enter the ring that evening as a 4/1 (+400) underdog, looking to stamp his history on the division while simultaneously crushing Holmes’ attempt.

What would unfold would not be considered one of the greatest fights in the sport’s history, but a significant result imprinted on boxing’s archives.

“I’m gonna knock the Jinx, off of Michael Spinks,” Holmes hollered from his Mercedes, with his gappy grin penetrating the camera’s lens. The IBF heavyweight champion was indulging himself in promotion for his 49th professional bout, giving the HBO viewers a tour of his Pennsylvania riches.

Hotels, restaurants, gift shops, branded busses, wine bars, you name it: Larry Holmes was becoming a brand. Despite never receiving the adoration of boxing’s public, Holmes seemed comfortable in his skin as he bragged of his accomplishments inside and outside of the ring. “Fighters are supposed to be dumb,” he’d claim with befuddling pride – Holmes took real honour in the investments he’d made outside of the ring to protect his family.

Many still resented Holmes. “The Easton Assassin” became the only man to stop Muhammad Ali in 1980 at a time where the “Greatest” was considered the most loved and revered man on the planet. As Thomas Hauser explained, Ali was well past his fighting prime that fateful evening: “It was a horrible night. Ali was a shell of his former self. He had no reflexes, no legs, no punch. Nothing, except his pride and the crowd chanting, ‘Ali! Ali!’”

Holmes’s later claim that “when the bell rung, I didn’t even know his name,” furthers the notion of his professional mindset and his willingness to do what it took to get the victory.

Turning 36 in the November that followed, questions were being asked of Holmes’ motivation to continue in the fight game. “Boxing is a hard sport, you get tired of doing it,” the IBF champion would claim in the run-up to his 12th year as a professional, but like so many before and after him, he found the allure of further riches, accolades and opportunities too hard and tempting to resist. Holmes had been well and truly infected by the boxing bug, even if Father Time was beginning to tempt an antidote.

Michael Spinks was peaking as a professional. “Jinx” had recorded 19 KOs in his 27 professional wins, sweeping the 175-pound division enjoying four years as a world champion. Jumping up to heavyweight and adding 25 pounds onto his fighting weight proved an unprecedented challenge for the Saint Louis fighter, but one that he used revolutionary techniques and science to accomplish.

Spinks would be guided by conditioning and nutritionist expert Mackie Shilstone during his eight-week camp in order to build the weight correctly and most efficiently. This form of strength and conditioning was unheard of in boxing camps prior, with Shilstone’s revolutionary input providing marginal gains in the results.

Long runs would be replaced by short sprints, interval training would replace stamina work, lean muscle building was prioritised, body fat was kept to 7%, and Spinks’ regular 1800 calorie diet was increased to 4500 by eating the correct, most nutritious and valuable food.

The results were seen on the scales as both men weighed in before their historic meeting. Spinks’ smile was as broad as his newly pumped shoulders; he looked a comfortable 200-pounder despite still being dwarfed by the 221-pound frame of Holmes.

The role, or, lack of role, for coach Eddie Futch was a huge talking point before both men embarked on their training camps. Champions who worked under Futch’s tutelage included Joe Frazier, Riddick Bowe, Alexis Arguello, Marlon Starling, Wayne McCullough, Montell Griffin and his first world champion fighter, Don Jordan, who was crowned world welterweight champion in 1958 – it just so happened that two names missing from that list were Larry Holmes and Michael Spinks.

Futch would decide to receive the splinter treatment by sitting on the fence, taking neither man’s corner for the bout. The man that knew both fighter’s biggest strengths and weaknesses would take the neutral corner on what would be one of their crowning nights. Nelson Bryson would work the corner of Spinks, with Richie Giachetti receiving the honour in Holmes’. “There comes a time in life where we all have to make a choice,” Holmes said before the bout, clearly disappointed at Futch’s decision to refuse.

As both men awaited their ring walks, ring announcer Chuck Hull introduced the 11,192 in attendance to Pia Zadora who sung the national anthem. The American actress and singer was granted the ‘flattering’ distinction of being classed in the ‘top ten sexiest women in the country’ – a sort of pound-for-pound ranking that clearly held value in 1985.

The general consensus before the first bell chimed had been moulded into a rigid school of thought. Holmes, the big favourite, would look to wear the smaller man down with his huge, crushing left jab, whereas Spinks needed to use the ring and his “heart” to escape the first half of the fight unscathed. “We want to see a great effort from Spinks,” admitted Sugar Ray Leonard on commentary, seemingly dismissing the chances of the challenger in unchartered territory.

After Holmes had cantered into the ring at an uncharacteristic pace, referee Carlos Padilla instructed both fighters together as they eye-balled each other up and down. In front of each of them stood the man that had the power to deny them an unforgettable piece of boxing history.

It was a tentative start from both fighters with neither willing to engage completely. Spinks was able to force Holmes onto the back foot as Holmes struggled to find his distance, with the champion acting patiently in pursuit of landing a thunderous, cocked right hand.

There were fears that Spinks would struggle with his lateral movement, having struggled with knee injuries in the past. The challenger had added 32 pounds onto his frame since his pro debut, with each joint feeling the strain of his new physique.

Spinks began to find joy with a snaking left jab thrown from the hip that would evade the guard of the champion. Holmes attempted to lean and hold in the clinch, but Spinks seemed wily and unintimidated by the heavyweight king. Holmes’ work looked laborious, as Spinks would circle his man popping out the more vibrant, effective work despite the threat of Holmes’ thudding jab and winding bodywork.

Spinks won the third and fourth, but by the fifth round, the pace was beginning to show. Spinks’ unorthodox, ungainly attacks were emphasised by the lactic acid building in his muscles, but Holmes was unable to capitalise or inflict real, lasting damage to the body.

Despite suffering heavy swelling to both eyes, Holmes began to time Spinks a lot better off the front foot as the fight approached the half-way stage. The champion started to inflict his jab on the moving target of Spinks with the challenger’s work rate slowing down a touch. Spinks was not hurting Holmes, but the consistency of output was drowning the work of the “The Easton Assassin” who struggled to pin down the elusive younger man.

This pattern would continue throughout the contest into the latter stages as Spinks dug deep, finding a second and third wind. Flurries of work were balanced by periods of rest in the rounds for Spinks as he rode his bicycle away from Holmes as the bell approached. Holmes’ corner was becoming restless at the sight of the champion’s reluctance to throw his right hand.

Holmes would add some urgency to his game as the final rounds ticked by, but by struggling to cut the ring off, Spinks was able to avoid any real danger throughout the 45 minutes of combat. A few big shots snuck through the guard, but the challenger refused to believe he could be hurt as they traded off in the 15th round.

As the final bell rang, the reactions of both fighters told the tale of the fight. Spinks’ eyes were bright as he smiled wide with his hands aloft in jubilation; Holmes’ eyes were closed shut as he sauntered back to his corner, seemingly expectant of the result that would follow.

“AND NEW,” echoed around Las Vegas as Michael Spinks was declared the winner, defying the odds, climbing the heavyweight summit at the first time of asking. Harold Lederman 142-143, Dave Moretti 142-143 and Lawrence Wallace 142-145 were the official score totals.

“I stand alone as the only one to do it,” Spinks yelled into the camera inside the ring, squashed to the centre surrounded by close to 100 other dignitaries. “I didn’t lose any speed; I was just as fast as I was as a light heavyweight.”

Holmes was heartbroken in defeat but spoke candidly about his struggle for acceptance. “Sometimes people light candles and pray for your defeat, and you can’t overcome that. I guess me worrying about that takes a bit outta’ me,” the fallen champion claimed. “Spinks was awkward, but not that strong; I just couldn’t get my right hand going. Styles make fights; Michael’s got a very unique style.”

Spinks would fight four more times before Mike Tyson ended his career in 1988. Holmes would refuse to retire, fighting on until 2002, another 26 fights after being toppled by “Jinx” and Father Time. Their rematch seven months after ended in a contested split decision victory for Spinks once again.

‘A good biggun will always beat a good littlun,” but not that night. Michael Spinks had pulled off one of the biggest shocks in heavyweight history and had done it his way.