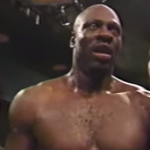 Jefferson is said to be on a ventilator, but it could be removed within a few days.

Jefferson (28-4-1, 21 knockouts), who won The Ring’s Knockout of the Year honors for 1999 with his sixth-round destruction of Maurice Harris, is recovering at Henry Ford Hospital in Detroit, where the 52-year-old is from. A total of 46 people are hospitalized at Henry Ford Hospital due to COVID-19, according to a Detroit News report Monday.

Jefferson fought five times in 1999, a rare feat in boxing today. He went 4-0-1 with three knockouts. After a draw against Marselles Brown, Jefferson knocked out former world title challenger Bert Cooper in two rounds, earned a split decision over once-highly regarded prospect Obed Sullivan, stopped Melvin Foster, and topped off the year with his iconic KO of Harris, who at the time was on a seven-bout winning streak. At the end of the year, Jefferson was ranked No. 9 by The Ring.

Jefferson eventually earned a shot at the title in March 2001 in Germany against future Hall of Famer Wladimir Klitschko, but he was stopped inside two rounds.

He last fought in 2005, losing by second round stoppage to DaVarryl Williamson.