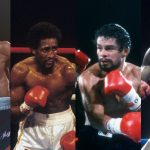 However, one era has remained untapped by The Bible of Boxing until now – The Four Kings. Those wonderful superfights between Hall of Fame warriors Roberto Duran, Sugar Ray Leonard, Marvelous Marvin Hagler and Thomas Hearns set the boxing world on fire throughout the 80s, creating arguably the greatest era the sport has ever seen.

In this 80-page special, we’ll revisit some of the buildup features that were released in the magazine during that decade, and some of the sport’s best writers have produced excellent retrospectives on each bout. Juxtaposed with stunning photography and designed by award-winning art director Michael Kronenberg, this special issue is a must for fight fans.

Here are just some of the highlights you can expect:

“Who Were They Picking?” sections – See what fellow champions and boxing insiders were saying before the fights took place

Training Camp Notes from the Hagler & Hearns camps ahead of their timeless showdown.

Alternatively, you can purchase THE FOUR KINGS subscription and this amazing new issue will be your first print copy. 1-YEAR SUBSCRIPTION/ PRINT & DIGITAL US $19.22, CAN/ MEX $26.22 INT $34.22. Promo Code: iboxer http://www.ringtv.com/subscribe

The post The Four Kings Special Issue: Available on pre-order now appeared first on The Ring.