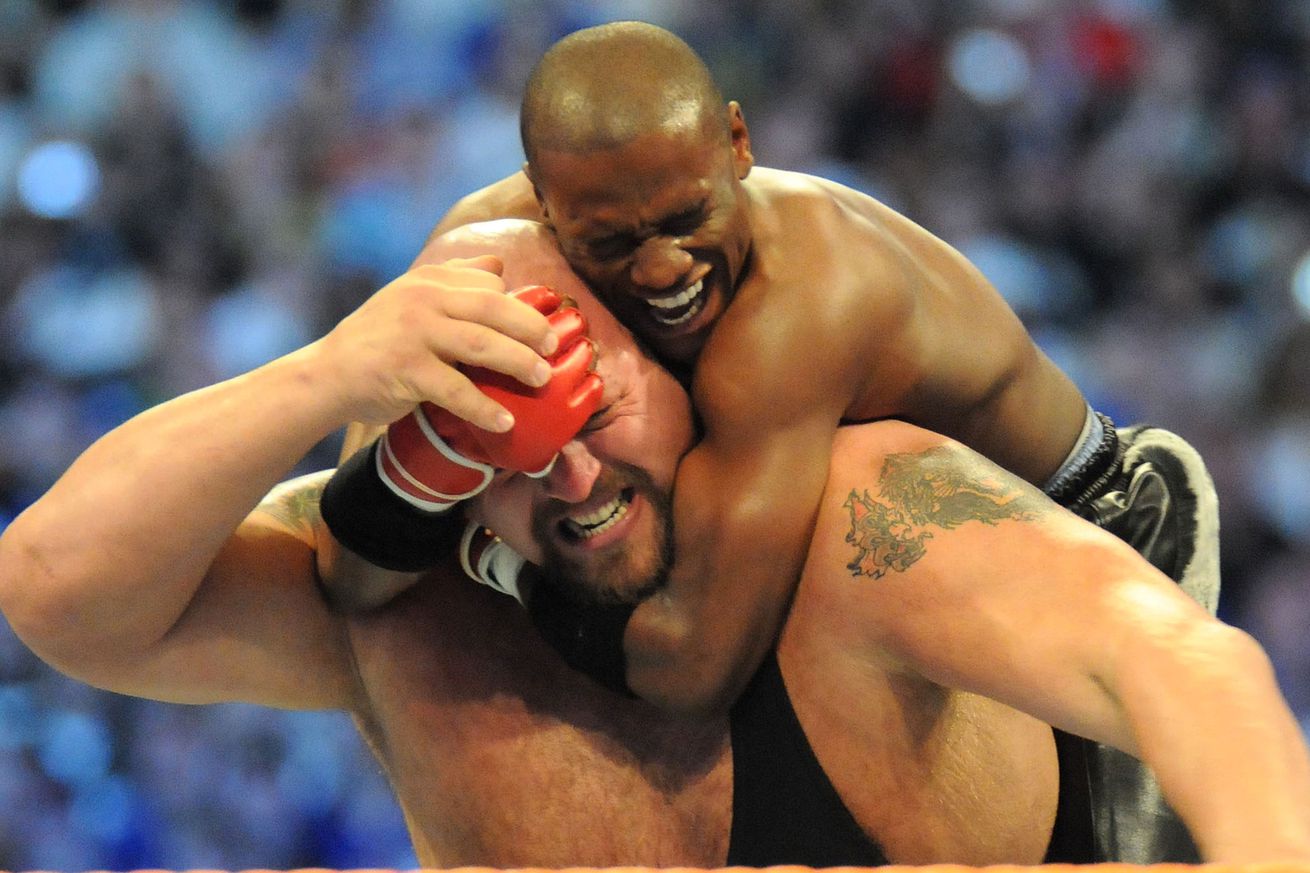 With WrestleMania 36 upon us as basically the only new thing happening on TV this weekend, we take a look back at “Money” Mayweather’s lone WWE contest.

If you’re following what’s going on in the world right now, which it’d be hard not to, you know that sports are shut down, including boxing, and it doesn’t look like we’ll be getting back to normal any time soon due to the coronavirus pandemic across the world.

And it’s not just sports. TV shows have shut down production, movie releases are being postponed. As far as just pure entertainment goes, there’s almost nothing new happening right now.

For better or worse, though, World Wrestling Entertainment (WWE) is keeping their show going, as are competitors All Elite Wrestling (AEW), holding events at company-owned venues with no fans in attendance. WWE’s weekly shows — RAW, NXT, and SmackDown — have gone through tapings at their Orlando Performance Center, the company’s state of the art training facility. And that is where this year’s WrestleMania, their biggest show of the year, is also being held.

Originally, WrestleMania was set to air on Sunday, April 5, live from Tampa’s Raymond James Stadium. It’s a yearly mega-event, on par with anything in sports or entertainment in terms of the sheer scale of the spectacle on hand.

That, obviously, cannot happen. Whether any WWE (or AEW) shows should be happening at all is at the very least debatable, but pro wrestling has always held the belief that unless absolutely forced otherwise, the show must go on. WWE changed the format to a two-day event this year, starting on Saturday, April 4, and concluding on Sunday with a second set of matches.

This year’s WrestleMania won’t resemble any WrestleMania before it, and certainly not the overwhelming glitz and glamour it has become yearly this century. (Despite any claims to the contrary, WrestleManias before 2001 were mostly presented in a pretty similar fashion to any other major pay-per-view event, shows from normal arenas and not stadiums, with exceptions for WrestleManias III, VI, and VIII. Now, the last WrestleMania to be held at a normal arena came in 2006, when WrestleMania 22 was held at Allstate Arena just outside Chicago.)

It was definitely a stadium setting in 2008 for WrestleMania XXIV. The show was held at the Florida Citrus Bowl (now known as Camping World Stadium) in Orlando, and is most famous to WWE fans today for being the site of the legendary Ric Flair’s final WWE match.

But a big part of the show’s marketing was also a novelty match between the red-hot new biggest name in boxing at that time, Floyd Mayweather, and WWE veteran Big Show.

After a terrific run as one of the best pound-for-pound fighters in boxing, Mayweather had shot to true superstardom in 2007, using HBO’s new fight-building documentary series “24/7” to shift from being “Pretty Boy” Floyd to “Money” Mayweather. He displayed a louder, more boisterous attitude than ever before ahead of his massive Cinco de Mayo fight with Oscar De La Hoya, the man who had largely carried the torch for big money boxing in recent years. Mayweather won the fight, and in December, he won a memorable bout against unbeaten British star Ricky Hatton, too.

Mayweather, who has retired from boxing several times over the years, announced his retirement after beating Hatton. It didn’t stick, as he’d return in 2009 to face Juan Manuel Marquez, but for all of 2008 he was totally out of the boxing ring.

To help further build his brand as a star, Mayweather turned to the wrestling ring and WWE. He first appeared at their No Way Out pay-per-view event in Feb. 2008, sitting in the audience. Eventually, he leapt over the barricade and attacked Big Show, an enormous man billed at seven feet tall and 500 pounds. Big Show famously received a broken nose from Mayweather in an altercation, as Floyd was new to working his punches.

Big Show made a challenge to Mayweather for a no disqualification, anything goes match at WrestleMania XXIV on Mar. 30. Mayweather accepted, and the match was set.

It’s worth noting that WWE miscalculated a fair bit early by portraying Mayweather as a babyface (good guy), figuring with his celebrity and the fact that he was drastically smaller than Big Show, that would be the way to go. But that was met with a fair amount of pushback from fans; WWE perhaps did not fully understand that although Mayweather had become a top tier drawing card in boxing, a lot of the audience was paying to see him lose. He was a heel (bad guy) in his profession, at least to much of its audience. It was his choice to go that route. Obviously, it worked.

Mayweather vs Big Show was positioned second-from-the-top on the WrestleMania card, which did just north of a million buys on pay-per-view (which was actually down from 1.25 million the year before).

In front of a WWE-reported 74,638 fans (WWE generally fudges these numbers to a degree), Mayweather took to the ring with Big Show. It wasn’t possible for Floyd to have become a good performer in a pro wrestling ring in the short amount of time he had to prepare, just as it wasn’t possible for Tyson Fury to do so when he worked a WWE show in Saudi Arabia last year.

But Big Show is really one of the great professionals of his era, and made the match passable from a technical standpoint. In terms of entertainment, they delivered well enough. Members of Mayweather’s entourage got involved, and some laid out, and you had Leonard Ellerbe ringside doing his best impression of Jimmy Hart, screaming throughout about what Big Show couldn’t be doing.

Eventually, Mayweather battered the giant with a steel chair, and then took a chain from the neck of a downed entourage member, removing a set of brass knux hanging as an emblem. After a knux-aided right hand, Big Show was counted out.

He certainly wasn’t treated as a hero by the wrestling audience, but he held up his end of things pretty well, all things considered.

And he made a reported $20 million for the whole thing.

For those who might be interested in this year’s WrestleMania, the special two-day event, recorded in the empty WWE Performance Center, begins later today at 6 pm ET for the Kickoff Show, and 7 pm ET for the actual show. You can buy the two-night PPV package at FITE TV for $59.99.