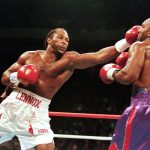 This feature originally appeared in the July 2018 issue of The Ring Magazine.

Ladies and gentlemen, introducing, from London, England, weighing in at 245 pounds, with a record of 41 wins, 2 losses, 1 draw and 32 knockouts … the 1988 Olympic super heavyweight gold medalist … the undisputed heavyweight champion of the world … LENNOX … LEWIS!

Always wholesome and devoid of controversy, Lennox Lewis was still a boxing enigma. A 6-foot-5 modern heavyweight with imposing physical advantages over most of his opposition, the colossal Brit was more pugilist than power-puncher. More smarts than smash. More risk-assessor than risk-taker.

Through the course of a 14-year professional career, Lewis had more critics than perhaps all his contemporaries combined. However, in the final analysis, this first-ballot Hall of Famer established himself as the finest heavyweight of his generation. He took the brutal game of boxing, made it chess and bellowed “checkmate” from the top of the mountain.

Like his predecessor, Larry Holmes, it was fated for Lewis to be unappreciated during his time. Holmes followed the Ali era. Lewis followed the Tyson era. But, again, like Holmes, the Lewis years have aged like fine wine. After all, how many great heavyweight championship fights have there been since Lewis’ retirement in 2004?

Even though Lewis defeated every man he ever faced as a professional, his road to the top was not without incident or drama. There was controversy and there was harrowing defeat but – perhaps the biggest surprise of all – there was a happy ending and a feeling of perpetual triumph.

“Me and Razor Ruddock trained together before the 1988 Olympics (in Seoul). I had him helping me because he was a professional at the time, and we had some great battles in sparring. Years later, when he came over to England to fight me, he said, ‘Lennox, I still have your blood on my boots!’ It was war because those are fighting words and that’s all I could think about when I got in the ring.” (laughs) Lewis TKO 2


“The fight was outdoors and it was so cold they had to wrap us in blankets. I’d looked at Bruno’s jab and thought I could get away from it, but the fight turned out to be an awakening. In the first couple of rounds, I’m like, ‘Hey, this guy’s jab is really good!’ Later, he hit me and I reacted with a left hook but, let me tell you, I didn’t even aim. I just threw the hook and he was in the way.” Lewis TKO 7


Lionel Butler
May 13, 1995. Sacramento, California:
“It was my first fight under (trainer) Emanuel Steward, but Pepe Correa (Lewis’ previous trainer) was in Butler’s corner. If you watch that fight, you can see Pepe shouting, ‘We’re gonna knock him out! We’re gonna knock him out!’ First, Pepe had been my trainer and he should know better. Second, shortly after the fight started, I knew that it was me who was going to win by knockout. Butler didn’t have the athleticism.” Lewis TKO 5

“He put me through hell for a couple of reasons. One, they dropped the ring size down to 15-16 feet (square) overnight, and every time I jabbed and stepped back, I touched the ropes. Also, Mercer did a smart thing in that every time he let his punches go, he smothered me afterwards. That was a test for me – and a good test – because it proved that I had heart. He came with his punches and I came back with mine. I passed the test.” Lewis MD 10

“I was prepared for absolutely everything, because I wanted this man in the ring. But, suddenly, he starts crying and goes through a breakdown. I’m in the corner and Manny says, ‘What are you doing? Get him!’ I said, ‘Manny, he’s crying!’ Manny shouted, ‘What the hell? Go and beat him up even more!’ McCall was one of two fighters to beat me but, at my best, 10 times out of 10, I’d beat him easily. If I didn’t lose a fight, I wouldn’t know how great I am.” Lewis TKO 5

(laughs) “My mother cooked for me before all my fights and she knows I like Scotch bonnet peppers. Before the Golota fight my stomach started to hurt and I asked my mom what type of peppers she used. She said, ‘I couldn’t get Scotch bonnet, so I used other ones.’ I get in the ring, my stomach is really hurting and then Golota pisses me off by looking at me funny. I was in no mood to hang around. The fans see the fight, but they don’t know the stories leading up to it.” (laughs) Lewis KO 1

“That was a battle between two young heavyweights. It was two guys who were the future. Briggs was making a lot of noise in New York, saying he was going to be the next champion. He said that he was going to knock me out. His best punches were the jab and a quick left hook, and he had good handspeed. But once I solved that problem, he was history. Briggs showed a lot of heart in that fight.” Lewis TKO 5

“I beat him but nobody in America wanted me to win the undisputed championship. We had the British crowd over in New York – it was like the whole of England was there – and it was just disappointing that people traveled all that way for a draw. Holyfield knew he’d lost and we still argue about that to this day. (laughs) He says that’s what the judges decided and he says it was a close fight.” (laughs) Draw

“I did it once and now they want me to do it again. Holyfield knows I’m dangerous and now he’s prepared for me. When you watch that fight, you can see that Holyfield really tried, but I just had to do the same thing again. He boxed a better fight, but he lost because of history and it’s no fault of his. He lost because a good big guy always beats a good small guy.” Lewis UD 12

“It’s fair to say this was my best performance, because I was so focused on avenging the loss. I just really wanted to get this guy in the ring. I had to chase Rahman down to get the rematch, and finally a judge said to him, ‘Did you sign (a rematch clause)?’ and Rahman says yes. The judge said, ‘Well you have to fight him!’ The rematch went absolutely to plan and the knockout was perfect. It was Christmas just after that fight, and I had an unbelievable Christmas.” Lewis KO 4

“The fight went the way I expected. Tyson is always dangerous, but Manny Steward said that it would be my easiest fight. Manny wanted me to knock him out sooner because from the outside he could see that Tyson wasn’t himself. I just wasn’t taking any chances in there, because I’m a firm believer in the fact that we have 12 rounds. Manny wanted it done sooner, and I wanted to wait a little longer.” Lewis KO 8

“I wasn’t prepared properly, but Manny and HBO pushed for that fight. I was meant to fight Kirk Johnson and then it got changed, but they said we should go ahead and fight on that date. At the end of the day, I’m a professional – a champion – and this was a 12-round fight. It doesn’t matter if Klitschko was ahead after six rounds. Things change in a fight. He was cut by a punch, he was bleeding and he lost.” Lewis TKO 6

“I was in the boxing game for a long time and there had to be a get-out plan. The get-out plan was win all the belts and retire. Once I’d accomplished that – boom – it was easy. I learned from past champions. I would tell people that Muhammad Ali was my hero and people would ask, ‘Do you think he held on too long?’ I never forgot that.”

FIVE THAT GOT AWAY

Only the golden age of the 1970s rivals the ‘90s in terms of the depth of the heavyweight division, and there were a few standouts who Lewis did not fight. Here are five, with Lewis’ comments on each fighter.

Michael Moorer: “Moorer was OK. He was a small heavyweight and a southpaw. Not too many people wanted to fight him because of that. We came really close to fighting, but he didn’t concern me. Moorer was too small and he couldn’t move like I could.”

Ike Ibeabuchi: “I thought he would have been a good ‘opponent’ for me in terms of being tough and durable. But in terms of it being a great fight or him being a good pugilist – no. I would have outclassed him and beaten him on points.”

Chris Byrd: “He came to one of my press conferences when he had a belt and said he wanted to fight me. I told him that I was a lion and he was a bird. Like Moorer, he was just too small for a heavyweight of my size.”

Riddick Bowe: “I would have knocked him out and he knows it, because I told him so. I rarely tell people they’re getting knocked out, but when I do, I mean it. Bowe wasn’t committed enough, and anyone who has a fridge in their bedroom has problems.”