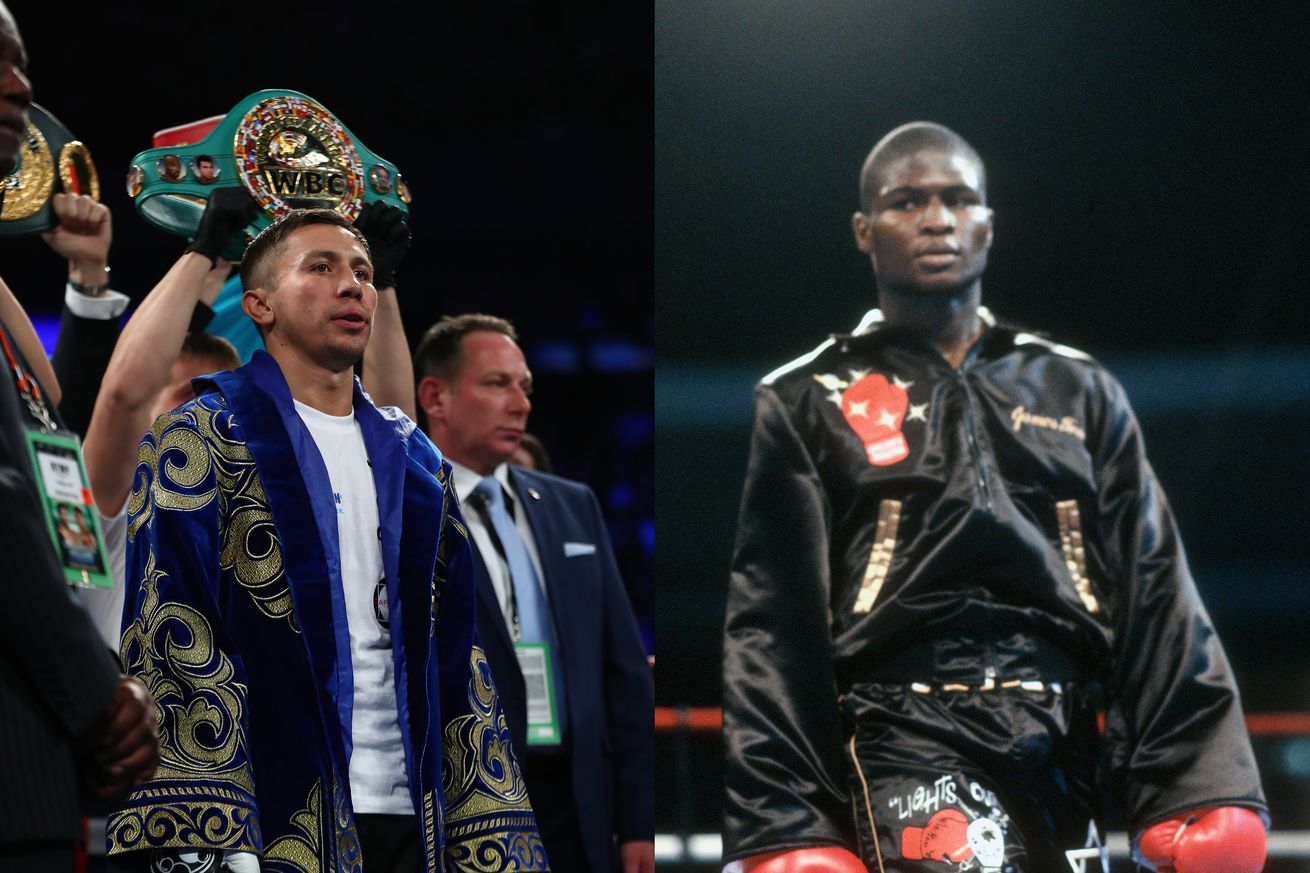 GGG vs Lights Out at middleweight. Who wins?

Our fantasy boxing series kicks off another Monday to Friday stretch (after this week, it might go to Monday/Wednesday/Friday or Tuesday/Thursday, but we’ll see) with a dream matchup in the middleweight division.

From Kazakhstan, it’s “GGG” himself, Gennadiy Golovkin, one of the most fearsome fighters of the modern years. And in the other corner, Grand Rapids, Michigan’s own James “Lights Out” Toney, who would later fight (and eat) his way up the ranks all the way to a half-decent run at heavyweight, but never lost in his time at 160 pounds.

Gennadiy Golovkin has become one of the most popular fighters in the sport over his 14 years in the pro ranks, and it’s not as if that was guaranteed when he made his pro debut in Düsseldorf on May 6, 2006. GGG fought 17 of his first 18 pro fights in Germany (the other was in Denmark) before making a trip to Panama in 2010, where he wiped out Milton Nunez in 58 seconds to win the interim WBA middleweight title, after which he would be promoted to full “world” titleholder.

Golovkin had a style and obvious skill level that kept a lot of top middleweights — chiefly Felix Sturm — from signing up to fight him. So he fought whomever he could, wherever they’d face him. Home in Kazakhstan, back in Panama, back in Germany, and then Ukraine before he made his way to the United States in Sept. 2012, where he headlined on HBO in a battering of Grzegorz Proksa.

It wasn’t easy for GGG to fully break through. He did poor HBO numbers for that Proksa fight, but buzz and easier available clips and ways to promote him were now on hand. And the buzz built has he ripped through Gabe Rosado, Nobuhiro Ishida, Matthew Macklin, Curtis Stevens, Osumanu Adama, Daniel Geale, Marco Antonio Rubio, Martin Murray, Willie Monroe Jr, David Lemieux, Dominic Wade, and Kell Brook from 2013-16.

In 2017, his long streak of stoppage wins ended when he had to go a tough 12 to beat Daniel Jacobs, and then came two fights with Canelo Alvarez that also went the distance, resulting in controversial results in a draw and Canelo victory in 2017 and 2018. Last time we saw GGG, he was going another tough 12, getting a close win over Sergiy Derevyanchenko.

James Toney turned pro in 1988 in Mount Clemens, Michigan. While it’s true he didn’t lose as a middleweight, he also didn’t dominate all the time. After starting 20-0 (15 KO), he went to a 10-round draw with journeyman Sanderline Williams in 1990, rematching and beating Williams soundly over 10 rounds three months later.

The 1991 split decision win over Merqui Sosa was a clear Toney victory that one judge just flat got wrong, and it’s worth noting that when Toney got his first title shot in 1991 against unbeaten IBF titleholder Michael Nunn, James was losing clearly on all three cards after 10 rounds before stopping Nunn in the 11th. Nunn was a damn good fighter, mind you, who would go on to win another title at 168 and challenge for one at 175.

His first defense was a little rocky, too, as Reggie Johnson gave him real problems in a split decision win for Toney. James then went to a draw with Mike McCallum in Dec. 1991 and won a very controversial decision over Dave Tiberi in 1992. His final fight at 160 came two months later, a clear win over Glenn Wolfe.

So Toney wasn’t spotless at 160, he wasn’t mega dominant, and he had trouble with the better fighters he faced, as well as Tiberi, who was not special but — in my view and that of many — was robbed of a major upset.

GGG’s record may look great in comparison. His only loss was controversial, his only draw controversial. But Golovkin has hardly blown away his three best opponents, either, in Canelo, Jacobs, or Derevyanchenko. He certainly didn’t run those guys over the way he’d done others.

What makes this fight most intriguing to me is the style matchup, which is usually the case when I think of fantasy matchups, especially the way we’re doing them here, which isn’t just “which of the top two guys ever would win this fight?” We’re looking at different sorts of matchups than just “Elite A vs Elite B.”

Toney had a very old school style even for the time. Offensively, he worked off a strong jab, and was terrific fighting inside and on the counter. Defensively, he was excellent at catching and rolling with shots and using that shell defense to set up his counters.

Golovkin had a good amateur background and has mixed a European style with his much-touted and beloved “Mexican Style.” He’s got crunching power and fights well applying pressure, but Toney was never stopped — not at 160, 168, 175, cruiserweight, or heavyweight, and it’s not like he didn’t face some guys who could bang or try to get him out. GGG’s defense often goes overlooked, but he’s actually a pretty good defensive fighter. Different approaches, yes, but he and Toney are/were both hard to hit clean.

So who wins? GGG or Lights Out?