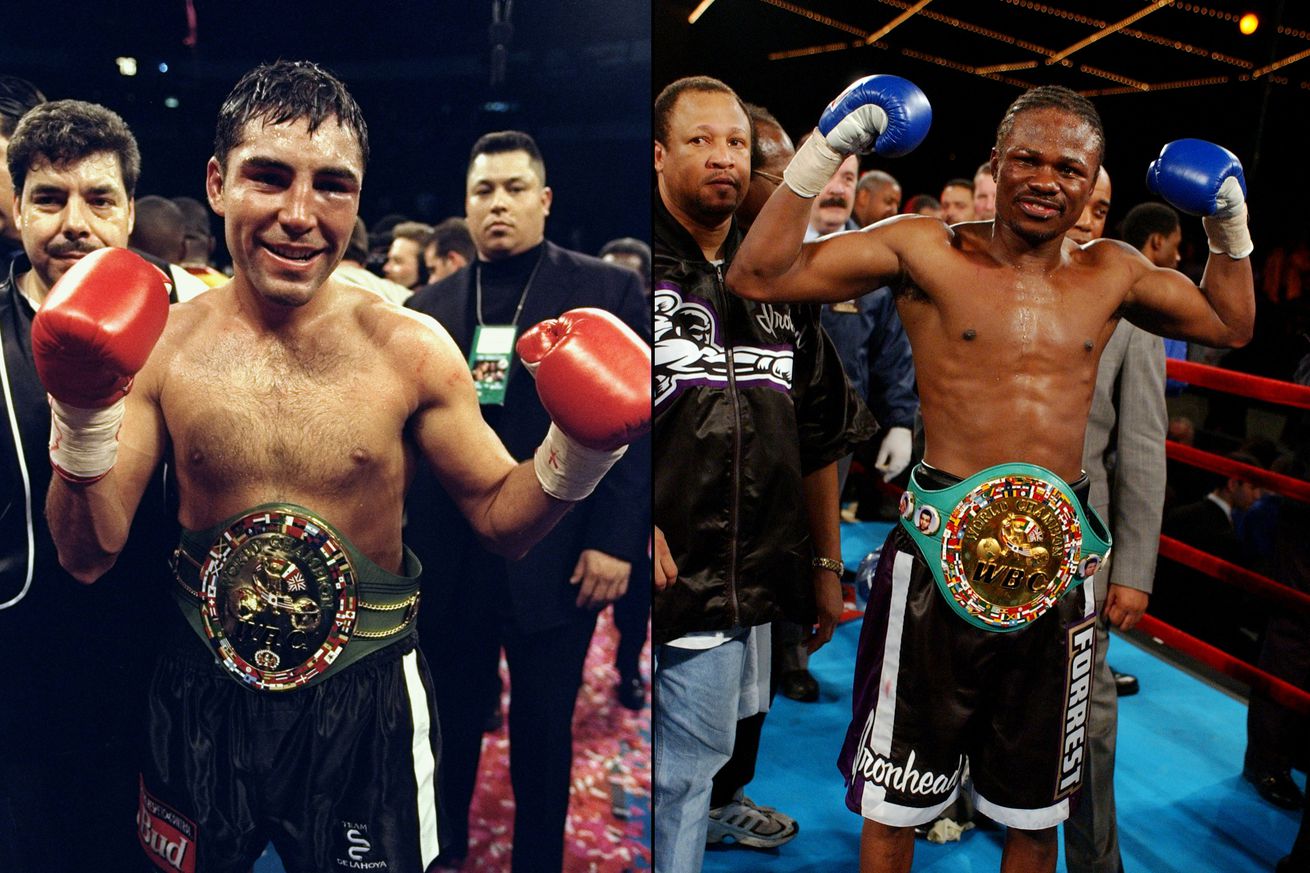 Two welterweights who could have met in the early 2000s, but never did.

Today’s fantasy boxing matchup isn’t one that crosses generations, but instead one that very easily might have happened in real life, except that it didn’t.

Let’s talk welterweights from the not too distant past, and if you’ve missed any of these, check out the hub page for the entire fantasy boxing series.

When Oscar De La Hoya moved up to welterweight in 1997, he’d already won titles at 130, 135, and 140. His first fight at 147 was a famous one we just discussed, a challenge against top pound-for-pound talent Pernell “Sweet Pea” Whitaker, which De La Hoya won in controversial fashion.

Oscar’s run at welterweight is slightly odd, because he was definitely a top fighter, but he also struggled in his biggest fights.

He beat Whitaker, David Kamau, Hector Camacho, Wilfredo Rivera, Patrick Charpentier, Julio Cesar Chavez, Ike Quartey, Oba Carr, Derell Coley, and Arturo Gatti. Those are good fighters, all of them. Chavez had gotten old and we already knew from a previous fight that he couldn’t deal with De La Hoya. Camacho was 35 and undersized at 147 against Oscar, and his best wins in years had come over faded stars Roberto Duran and Ray Leonard. Gatti was a beloved warrior, but he was always out of his depth against top guys. So those are good names on the record, but with asterisks.

And in there you have very questionable wins over Whitaker and also Ike Quartey in 1999, the latter a split decision that went De La Hoya’s way, which was a hell of a fight. Quartey was a damn good fighter and proved a tough style matchup.

Oscar took two losses at 147, to Felix Trinidad in 1999 and Shane Mosley in 2000. These were also debatable fights. My personal believe is Mosley beat Oscar in a terrific fight, and that Oscar had a very good argument for a win over Trinidad, but he really has nobody to blame but himself as he laid off the gas and let that fight slip out of his grasp.

(Oscar also lost at welterweight to Manny Pacquiao in 2008, but that was an obviously post-prime, part-time version of Oscar who really shouldn’t have been trying to fight at 147 anymore. I still think Oscar possibly could have had a few more decent outings at 154, but he got out at the right time, more likely than not.)

So Oscar went 11-2 at welterweight in the relevant years, with two wins controversial, but both losses debatable, too. He was one of boxing’s biggest stars in that time period.

“The Viper” from Georgia had some solid wins and had won the IBF title against Raul Frank in 2001 when he was matched against a 38-0 Shane Mosley in 2002. Mosley had battered three straight opponents following his split decision win over De La Hoya in 2000, but Forrest proved to be all wrong for him, winning a clear decision and taking the WBC belt from “Sugar” Shane. To put it simply, Forrest kicked Mosley’s ass.

When they ran it back six months later, we got the same result. Mosley proved to be tailor made for Forrest, and it wasn’t all that shocking despite Forrest being the major betting underdog. Forrest had beaten Mosley during the trials for a spot on the 1992 Olympic team, too.

And then, just as Forrest was peaking, with talk that maybe he was the best pound-for-pound fighter in the world, he met his own kryptonite immediately in the form of Ricardo Mayorga, a crude slugger from Nicaragua who shocked the world with a third round TKO of the heavy favorite in Jan. 2003. When they rematched six months later, Mayorga pulled maybe an even bigger surprise by beating Forrest over 12 rounds. He didn’t catch him cold early that time, he just beat him. Forrest would go up to 154 pounds after that, as De La Hoya had after beating Gatti. Both won world titles again.

Forrest was an outstanding fighter at his best. At six feet tall, he was a huge welterweight with a 73-inch reach, but you could also argue that he was a wonderful example of styles making fights. He was kryptonite to Shane Mosley, who was a great fighter on a roll. And yet he couldn’t deal with the wild swinging of Mayorga, a fighter who made the most of his fearlessness and power with little boxing skill considering the level he was at.

De La Hoya wasn’t too much shorter than Forrest, at an official 5’10½”, and had the same 73-inch reach. He was a totally different matchup than Mosley, but he was also not a Mayorga. Physically, the closest matchup Oscar had at 147 was Trinidad.

By the time Vernon got to really make his mark against Mosley in ‘02, De La Hoya had moved up to 154. And when they were both at 154, Forrest was rebuilding after the Mayorga losses, while Oscar was becoming a part-time star attraction, chasing the biggest money. Forrest and De La Hoya just never crossed paths.

But say they did in 2000-2002 or so. Who would have won? Would De La Hoya’s skill set have proven too much for Forrest, or would Vernon have forced Oscar into those DEEP WATERS, and if he did, would De La Hoya have swam?

Try to consider no judging controversies, too, since that might pop into your head quickly.