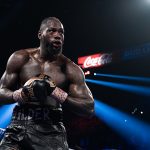 In a recent PBC podcast on Wednesday, former WBC heavyweight titlist Deontay Wilder reveals he underwent biceps surgery, which he says he injured during his previous fight, when Tyson Fury stopped him at 1:39 of the seventh round on February 22 in Las Vegas for the WBC title. Wilder said he was given a date of sometime at the end of May when he’s able to resume working out.

Wilder (42-1-1, 41 knockouts) stated that he’s currently undergoing therapy and is hoping to return for the third fight against Fury sometime later this year. Considering the current COVID-19 pandemic going on right now, that may push back the reported October 3 date for the third fight with Fury (30-0-1, 21 KOs).

“I’m looking forward to working out and doing the things that I like to do,” Wilder said.

“Maybe I’ll come out with some things later on as things unfold and I get into camp.”

Wilder ruled out any tactical mistakes.

“It’s easy to understand what type of person Deontay Wilder was in that moment in time,” he said. “Even when I took off the mask, the things that I was doing … I’ve been in this sport a very long time, and people that have seen me fight all over the world for a very long time, so people automatically know how I am, and how I seemed okay.

In my eyes, I don’t see Fury as a champion. It’s still going. He ain’t the champion yet. We still got one more fight left.

Wilder said from the start of the bell in the rematch he was in retreating mode, which he said was in stark contrast from the first fight with Fury, when “he was a guy on the hunt.”

“You don’t go backwards, you more forwards, and that night, I wasn’t myself. There’s a lot of things I can’t say. We can only get stronger and learn from situation and get better. In my eyes, I don’t see Fury as a champion. It’s still going. He ain’t the champion yet. We still got one more fight left.

Wilder said he wasn’t surprised that Fury was that aggressive in the rematch. He kept stressing that “I wasn’t there. From the first start, my whole body and everything.”

He went on to say he’s looking forward to “giving the world the best of Deontay Wilder.”

Wilder said that he’s put the loss behind him. He admitted many trainers and old pros have reached out to him since the Fury loss. Wilder also said that Team Wilder will be bringing in two additional people to bolster his corner, but “we don’t have it down yet.” He said his challenge was getting up after losing, and he stressed he’s winning “in life.” He hinted that he may have gotten “comfortable with certain things.”

He said the loss has only made him more determined to come back.

“I’m not done yet,” Wilder said. “Everything is going to be alright. Trust me. This (third fight) is the last final straw right here, as I see it.”

The post Deontay Wilder says “I don’t see Fury as a champion” appeared first on The Ring.