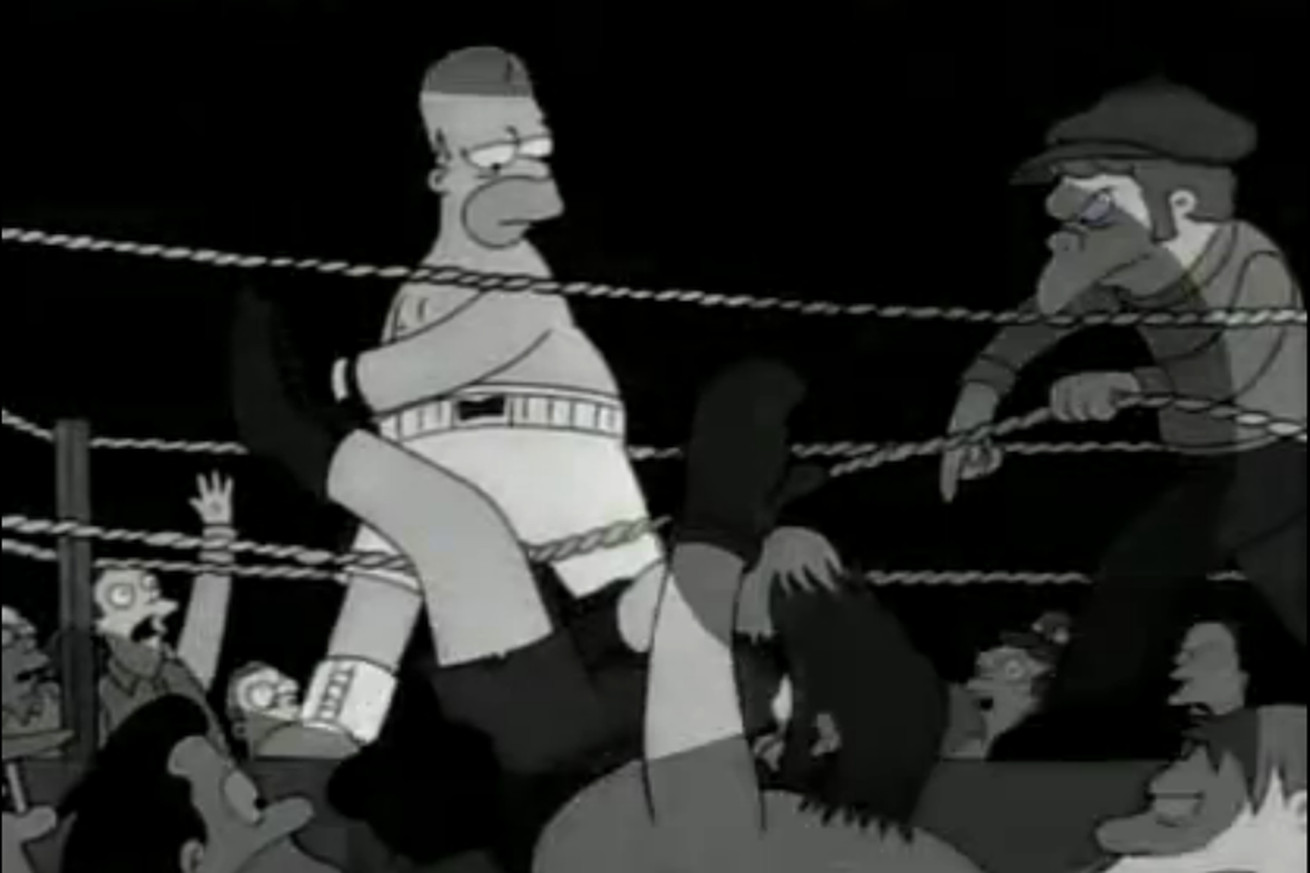 With Twitter debating the best Simpsons episodes ever, now seems the right time to look back on a personal favorite.

Boxing might just be the most ridiculous sport in the world. In what other profession besides pro wrestling could the world champion jumping off a car hood to dropkick a mouthy challenger be just an amusing historical footnote?

One would think that this absurdity would make it ripe for lampooning, but boxing comedies have been, appropriately, hit and miss. While we’ve seen plenty of attempts to create a defining pastiche like Caddyshack or Bull Durham. from The Great White Hype to Grudge Match, nobody ever hit the mark as perfectly as Episode Three of The Simpson’s eighth season: The Homer They Fall.

The setup is simple: while browsing a gadget store with the family, Bart offers Comic Book Guy $4 for a Star Trek-style utility belt he was attempting to return, as “the average Trekker has no use for a medium-sized belt.” While showing it off at school, the bullies take offense, pummel Bart, and take it. Upon seeing Bart’s shiner and other assorted bruising, Homer takes it upon himself to squeal to the bullies’ parents, who in turn beat the snot out of Homer as he, completely unfazed, asks for the belt back.

Upon seeing the walloping, which includes a pool cue upside the head, Moe convinces Homer that his inhuman durability could let him succeed as a boxer where Moe, who glumly recounts his own career trajectory from “Kid Gorgeous” to “Kid Presentable” to “Kid Gruesome” to “Kid Moe,” failed.

Giving Moe 60% of the profits, of course.

As Homer is too out-of-shape to throw more than one punch and too weak to hurt a fly with that punch, Moe devises a strategy that has since become synonymous with the name “Homer Simpson”: let his opponents exhaust themselves punching his unprotected face and then nudge them over.

Thus begins a journey that takes Homer from barfights against tramps to more barfights against tramps until Moe receives an offer from legendary promoter Lucius Sweet, described as “exactly as rich and as famous as Don King, and he looks just like him, too,” to pit “The Brick Hithouse” against definitely-not-Mike-Tyson Drederick Tatum upon the latter’s release from prison.

Despite coming out in 1996, the episode has aged like...well, I’d say “wine,” but we’re sticking to a boxing theme, so let’s say Bernard Hopkins instead. It combines Airplane! levels of joke density with razor-sharp wit, from Moe forgetting to remove the barbed wire from his lucky gloves before giving them to his charge (“We called that The Stinger. They don’t let you use that no more.”) to the increasingly gaudy car washes Homer purchases with his fight money during his montage of shoving tired bums. Some choice quotes:

It’s clear throughout that the writers genuinely understand boxing; Tatum’s press conference turning out to be a parole hearing, an advertisement gleefully using Tatum’s crime to sell the fight, and Buffer announcing that they’re skipping the national anthem “by popular demand” all remain timely and hilarious. By engaging with the sport’s sub-surface absurdity, they’ve created a timeless classic that appeals equally to boxing diehards and those who couldn’t name a heavyweight champ besides Tyson.

Also, Moe’s superheroics with the Fan Man outfit in the credits are an all-time-great gag.

Everyone needs a laugh these days, and The Homer They Fall delivers in bunches.