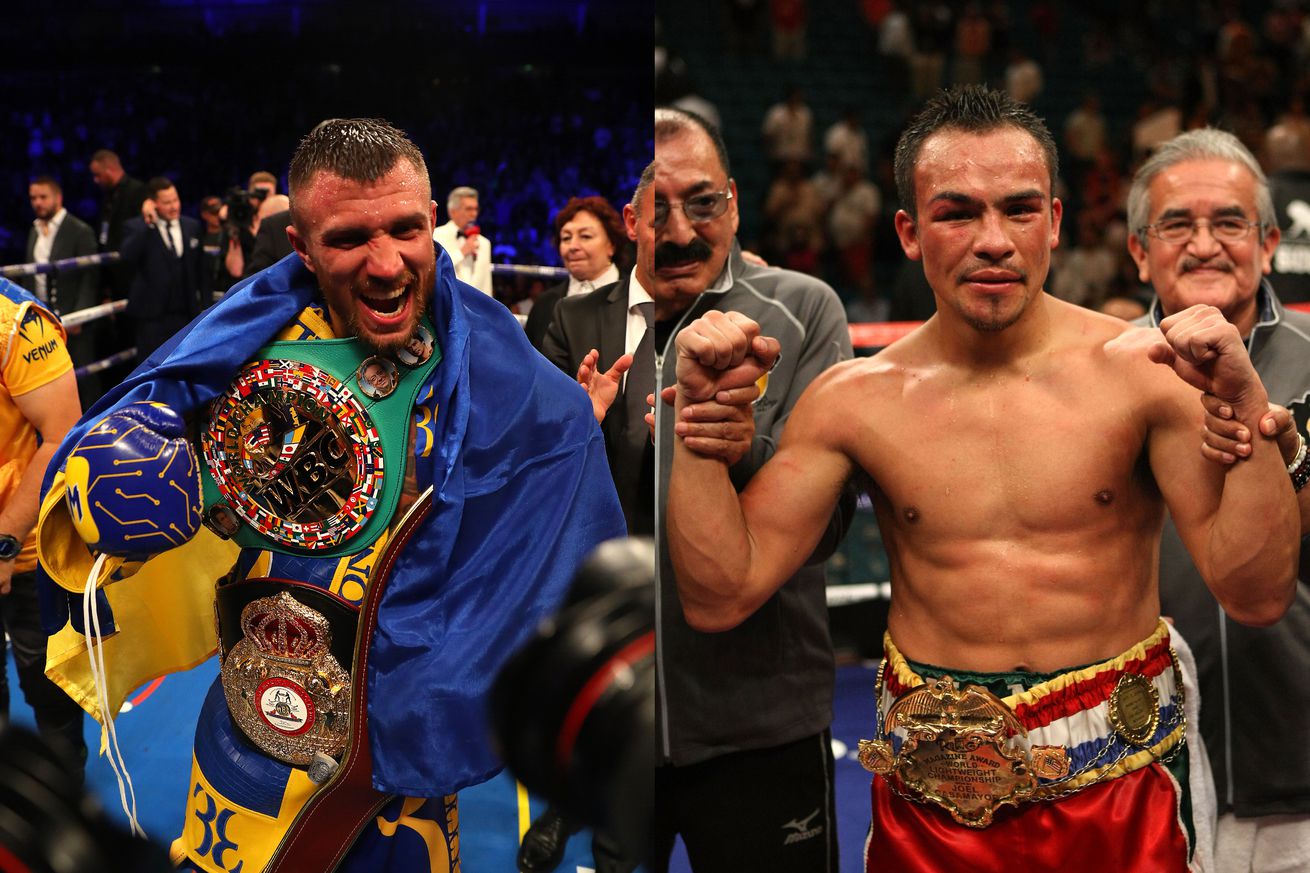 Two highly skilled champions, each bringing something different to the table. Who wins between Loma and JMM?

The fantasy boxing series rolls on with another matchup!

If you’ve missed any of these, check out the hub page for the entire fantasy boxing series.

Just so there’s no confusion, here’s the layout: 130 pounds, 12 rounds. I know both of these guys fought (and very well) from 126 to 135, and Marquez went a good bit higher successfully. They’re both really natural featherweights, but Marquez might actually have been even better around 130-135 than he was at 126. So I decided to land in the middle at 130 for this one.

Lomachenko is currently considered by many to be the best pound-for-pound fighter in the sport. An all-time great amateur, the Ukrainian has translated those skills successfully to the pro game, though he got an eye-opener in his second pro bout in 2014, losing a split decision to rugged Mexican veteran Orlando Salido. He bounced back strongly from there, of course, beating Gary Russell Jr next time out to win the WBO featherweight title, and has pretty much dominated since.

Marquez won the IBF featherweight title in 2003 (having lost a 1999 WBA challenge to Freddie Norwood), and his first of four bouts with Manny Pacquiao came at 126, a 2004 draw. He also lost to Chris John at featherweight in 2006, but he hit a big stride in 2007, beating Marco Antonio Barrera in what was Marquez’s 130-pound debut. He got another crack at Pacquiao in 2008, losing a controversial split decision.

Marquez then went up to 135, chasing a third fight with Pacquiao. He beat Joel Casamayor in a terrific fight in 2008, and Juan Diaz in what was widely considered the 2009 Fight of the Year. From there he bounced between 135 and 140/147, winning some fights, including a brutal KO of Pacquiao in 2012, losing a couple to top-tier guys, and then retired after a 2014 win over Mike Alvarado.

Lomachenko has moved up in weight not chasing anyone specific, the way Marquez did, but chasing big fights. He couldn’t get anyone to fight him at 126, so he went to 130 and immediately knocked out Rocky Martinez to win the WBO belt. He ran out of guys at 130, so he went up to 135 and took the WBA title from Jorge Linares, who is a hell of a fighter and gave a great effort in the bout before getting stopped in the 10th.

Both of these guys are incredibly capable over three divisions, 126 to 135. So again, I think 130 fits nicely.

Lomachenko is a sort of magician in the ring, a real boxing genius. His foot work is constantly and rightly praised, but his head movement is otherworldly, too. Even if you manage to trap him a bit, or can get some shots off, he’s good at slipping blows. Offensively, he’s slick, fast, and puts punches together very well. He uses angles extremely effectively, and he’s a sharp puncher with plenty of power backing up all that technique.

Marquez was another tremendously smart fighter, and one who changed and adapted in fights and over the years. He was chiefly a counter-puncher in his earlier days, didn’t buy into the stereotypical “Mexican style,” and as such had a harder time than contemporaries like Barrera or Erik Morales in becoming a star with Mexican fight fans. Over time, he got a bit more aggressive, a little more willing to lead the action, and he maintained his excellent counter-punching, too. As he went up in weight, he became more and more willing to take risks. It made for great fights, and made him a greater fighter.

We also know that Marquez was better than just about anyone at handling a dynamic southpaw with odd rhythms, great speed, power, and skills. From 126 to 147, Marquez was someone Manny Pacquiao, even at his very, very best, just could not overwhelm or dominate. Loma is not Pacquiao, of course, their styles are very different in spite of some general similarities, but maybe that indicates Marquez would have better answers for Lomachenko than most opponents do.

Size-wise, there’s not a lot of difference. Both listed at 5’7”, Marquez would have an official reach advantage of an inch-and-a-half.

So who wins? Loma or JMM?