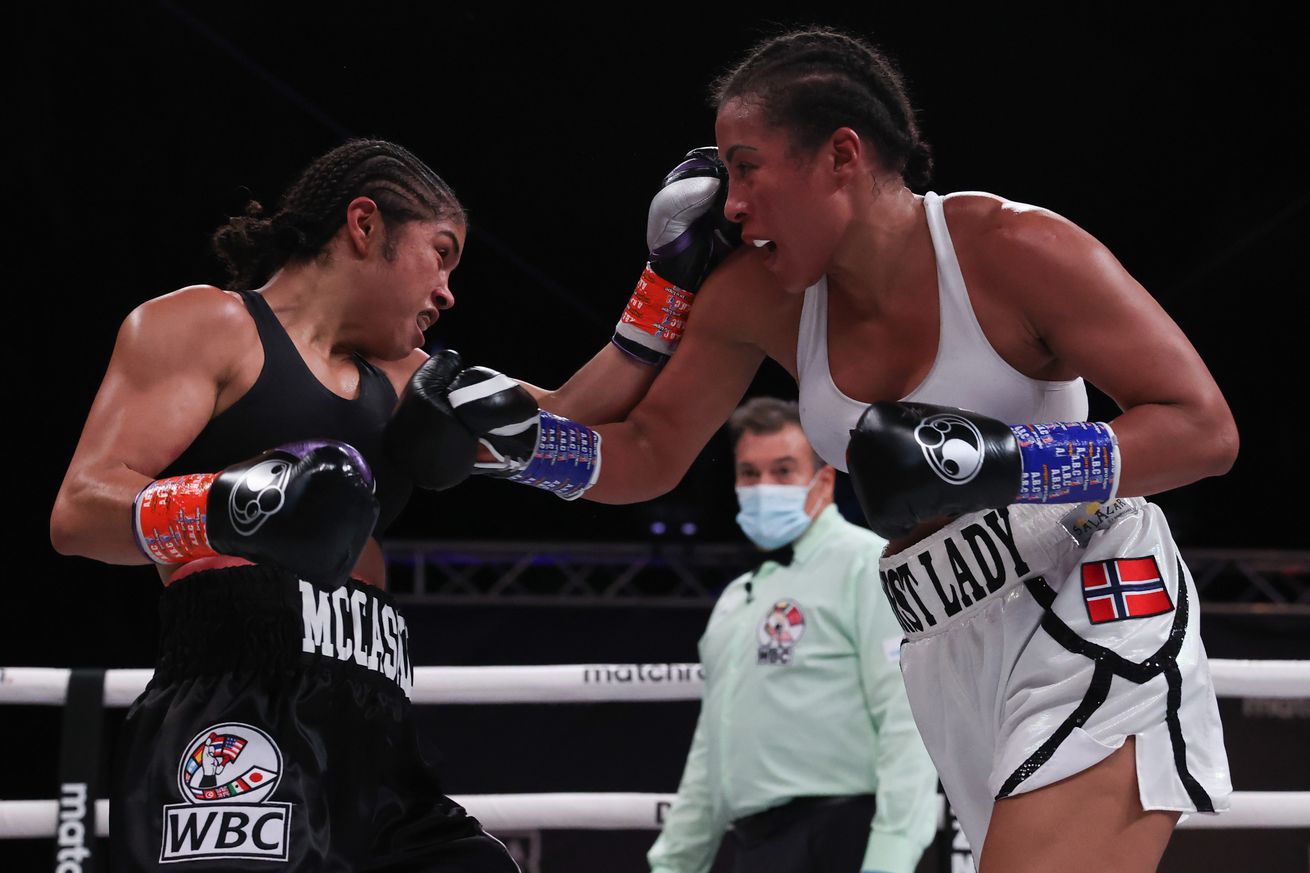 Matchroom Boxing have announced that the two will meet again.

Cecilia Braekhus seemed to be strongly indicating that she would retire following her upset loss to Jessica McCaskill on Aug. 15 in Tulsa, but Matchroom Boxing have announced today that Braekhus will fight on, as a rematch between the two is on, with Braekhus choosing to exercise her rematch clause.

Matchroom did not announce a date or venue with the news, but there is a DAZN logo on the fight art, so that part’s encouraging.

McCaskill won a majority decision over Braekhus last month, but Bad Left Hook scored the fight for Braekhus, and we were hardly alone in that. That’s not to say it was a robbery, but a very competitive fight that you probably scored on whose work you liked better. McCaskill did out-work Braekhus, but Braekhus probably landed the best shots of the fight with a more economical approach.

McCaskill (9-2, 3 KO) ended an 11-year title reign for Braekhus (36-1, 9 KO) with the victory, and became the undisputed welterweight champion of the world. That made the 36-year-old McCaskill a two-weight champion — she came in holding a pair of belts at 140 pounds — and Braekhus didn’t argue or complain about the decision post-fight, instead hinting strongly that we may have seen her last fight.

“That’s the fastest retirement I’ve ever seen in boxing history,” said McCaskill. “She’s back! We knew she would be back and that it would only be a matter of time. Usually those types of conversations straight after a fight to direct the audience’s eyes away from the loss. In this sport, so many people have said that they are retired and then come back to have fights.”

McCaskill noted that there’s no beef between the two fighters, and that she went to Braekhus’ locker room after the fight in August to return Braekhus’ belts herself, rather than sending a team member.

“I gave her the belts back and just wanted to be the one to do that,” the Chicago native said. “There’s never been any bad blood, I could have had my team send the belts back but there was no reason not to give the belts back myself, so we went over to her room and she was on the phone to her family. When she got off the phone, she made comments to passing the torch, and with her being beaten for the first time, I think she expects someone else to carry on her legacy. I have my own legacy to fulfill and that’s where my focus is.”

Braekhus said it was her worst performance to date, and that she didn’t want to go out not believing she fought at 100 percent.

“It was the weakest performance in my whole career,” said Braekhus. “I still feel I won, or could have got a draw, and when I thought about that, I knew I could beat her in a rematch. I didn’t want to go out with a career-worst performance either, I definitely owe that to my fans. If this was a fight where I lost to a better fighter, had been in my best shape and had given it my all, then fine, I could retire, but that was not the case here.

“She gave her everything in the ring and I wanted to give her props for that, I knew what I was going through and what I was struggling with, for everyone this was just a tough time. But we need to meet again under different circumstances.”