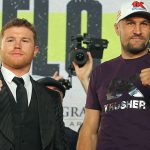 Sergey “Krusher” Kovalev is hoping to maintain his relevance and make Canelo Alvarez (52-1-2, 35 knockouts) regret stepping up two weight classes when the two clash on Saturday, Nov. 2 at the MGM Grand Garden Arena in Las Vegas, which will be streamed live exclusively on DAZN.

Kovalev (34-3-1, 29 KOs) has the WBO light heavyweight belt and feels a victory over the 29-year-old Alvarez, the former WBO super welterweight beltholder, and current WBC “Franchise” titlist, the WBA, lineal, Ring Magazine middleweight titlist and WBA super middleweight beltholder, could give him that crossover appeal he’s craved throughout his career.

Kovalev, who is just coming off an 11-round TKO over stubborn Anthony Yarde in his last title defense, now has Hall of Famer Buddy McGirt in his corner and he feels that addition has helped re-invent himself. Kovalev is also coming off a quick turnaround from the August bout in Chelyabinsk, Russia.

On Tuesday, Kovalev, 36, addressed the media in a conference call and spoke about what this victory would mean to him.

“All I can say is the only thing we had to change is not coming to camp in full force, because (Kovalev) was already in shape,” McGirt said. “We took it day-by-day, nice and easy, nice and slow. The camp is great because everyone gets along with everybody, and everybody trusts everybody. Everyone is in a relaxed mood. We know what we have to do.

“As far if we win, well I should say, when we win, because I believe in all my heart that Sergey is going to win, and it’s not going to be as hard as a lot of people think. We’re on the same page all of the time.”

Kovalev expressed his liking for the shorter training camp—and McGirt.

“Buddy teaches me everything right after my losing control of my training,” Kovalev said. “When I lost my title (to Eleider Alvarez in August 2018), I had to use all my amateur experience in defending my title. I lost all of my technique, because I didn’t have a good coach in my training camp. Nobody controlled me. No one gave me instruction and I did everything by myself.

“I was looking for the right coach and I found Buddy McGirt.”

Asked what he thought about being vulnerable “handpicked” opponent by Golden Boy Promotions and Alvarez for this fight, Kovalev said, “This is a huge fight for him and for myself. He has nothing to lose. I have to defend my title. I lose more than Canelo will lose. He’s trying to make history.

“Beating Canelo would mean more opportunities in front of me.”

Kovalev is in a unique situation as being the underdog. He’s hardly ever been in this position in his career. Alvarez does have a history of winning close, disputed fights on the scorecards.

Does Krusher feels he has to knock Canelo to win?

“Everyone puts me in the same position and it’s one-against-one, and Canelo is a great boxer, but believe me, and I’m having a very good training camp and everything is going very well,” Kovalev said. “I’ll take instruction after each round. My goal is to get the victory at any cost, but by knockout, yes, of course.”

One interesting point that Alvarez made two weeks about facing Kovalev was going to the body. Canelo feels that is a Kovalev weakness. “Without a doubt,” Alvarez said. “(Body shots) are the most important punches for any fighter; not just in this fight, in all fights. Of course more so for this fighter, that’s a weak link that he has, so of course, we’re going to bang to the body.”

Kovalev can counter with his heavy jab, which he planted Yarde with back in August.

“It’s only happened to him one time, and that was in the Floyd Mayweather fight. He really couldn’t get into his groove. He became a better fighter and was able to dominate everybody, but realistically, who did he really fight? Since the (Eleider Alvarez rematch), I never had to remind Sergey again (about using his jab).”

The post Sergey Kovalev says beating Canelo Alvarez “Means more opportunities in front of me” appeared first on The Ring.