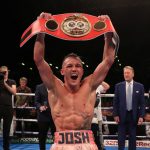 No surprises in this one.

Cerebral pressure-fighter Josh Warrington successfully defended his IBF featherweight title for the third time by posting a second-round stoppage over undistinguished Frenchman Sofiane Takoucht at the First Direct Arena in Leeds, England, on Saturday. The official time was 2:54.

Warrington, who is rated No. 2 by The Ring at 126 pounds, dropped the challenger with a straight right hand in the second and would not be denied. The southpaw challenger rose, but another frenzied series of power shots dropped him heavily for a second time. Again Takoucht found his feet, and he even managed to fight back, but his head was being snapped back with vicious lefts and rights when referee Bob Williams called a halt.

“We’ve worked on fighting southpaws for the last 11 weeks and it paid off,” said Warrington in his post-fight interview with BT Sport in the U.K. “There was nothing personal between me and Takoucht. It was just business.”

The defending titleholder was on the attack from the opening bell, forcing Takoucht to work harder than he wanted to. A nice combination of head shots and a big right hook landed flush from Warrington, and the Leeds man also made a target of the body. The home fighter’s early success in Round 1 was ominous news for Takoucht and the early finish was no real surprise.

The only concern boxing insiders had for Warrington (30-0, 7 knockouts) coming into this bout was his motivation. Following high-profile triumphs over Lee Selby (to win the title), Carl Frampton and Kid Galahad, the 33-year-old Takoucht was a significant step backwards. On paper the challenger didn’t have a prayer and he was dealt with accordingly.

The 28-year-old Warrington has been very vocal about his intentions of unifying the featherweight division. To this point, there have been no meaningful negotiations with the rival titleholders, but promoter Frank Warren insists that unification fights will be the target for Team Warrington in 2020.

“We’re looking at Xu Can (WBA regular titleholder) for a unification fight,” Warren confirmed. “He defends in the United States (against Manny Robles III on Nov. 23), so let’s see the outcome of that and we’ll keep our fingers crossed that we can get that fight over the line.

Manchester’s Zelfa Barrett successfully defended his Commonwealth junior lightweight championship by posting an impressive ninth-round stoppage of Scotland’s Jordan McCorry. The official time was 1:43. Barrett (23-1, 13 KOs) utilized a terrific left hook to the body to score knockdowns in the third and the eighth and closed the show with a perfect right uppercut in the ninth. McCorry drops to 18-7-1 (4 KOs).