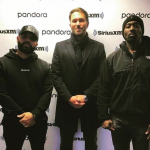 The chip off the business block, the son of prominent UK promoter Barry Hearn, spoke to hosts Ak and Barak, and sat back in the chair and summed up his foray into the US market.

Hearn admitted that at times, the boxing biz is the worst in the world. But, he said, getting some time off over the holiday break, he was able to comprehend the bigger picture impact Matchroom has created in America. (In May 2018, news dropped that Hearn would be graced with virtually an open vault by DAZN, to conjure boxing content to attract subscribers for the streaming entity’s US push.) Hearn is the main grocery buyer for DAZN, and admitted that it hasn’t been as easy as he thought he’d be.

“You get discouraged all the time in this business,” he said, speaking on how he has been surprised at some of the deals some fighters have turned down in the last year plus that DAZN has sought to make an indelible stamp on the sport, in the name of building their brand.

Also, sadly, he now understands how unpopular boxing is in America, he said, and so that means there’s more hard work to do.

The Brit spoke on how rivals, like Al Haymon, have made his job harder. He said that he has signed PBC fighters, but often times has made offers, and then heard that fighters went to Haymon, received his input, and then spurned the Hearn offer. Those offers have usually been severely generous, and so it puzzles Hearn when he is turned down. Offering two or three times what you’ve made as a previous best purse, and getting turned down…Yes, that is puzzling, and can be discouraging.

Fighters fall under a spell, Hearn said. “Haymon’s an excellent operator,” Hearn said. “He’s a genius at what he does, especially in the way he gains that belief in the fighter. It’s almost like, ‘Whatever you offer me, I’m gonna check with Al. And if Al says no, it’s no.”

But isn’t that loyalty, and a good thing? Yes…to a point, said Hearn. Their loyalty prevents more than a few desired fights from getting made.

Hearn said DAZN wants to build a great schedule; thus, he’s OK with doing one-offs, with having a Mikey Garcia, say, come in for one fight…and then jet.

So, Haymon is an advisor, Hearn continued, and an advisor must be looking out for that fighter, steer them toward the best deal. And, he said, he believes he’s offered guys twice as much as they’ve made before…and they still say no. Why, he wonders.

A Charlo, a Jermall Charlo, come on over, one fight, and maybe bolster your legacy, and get paid massively for the risk taken, Hearn said aloud. “Two, three times as much as he’s made, I can’t even get a reply,” Hearn said.

Hearn says he has no problem with Al, it’s not that. He has met Haymon twice, he continued. He met him in Santa Monica, to talk Carl Froch vs. Julio Cesar Chavez Jr. “A very calming man, super intelligent” was his assessment at the time. He sees Al like he sees Bob Arum,  giving them props intelligence and for their longevity. (Even if sometimes Hearn and Arum have Napalm snowball fights on social media.)

Hearn said next time he met Al, Shelly Finkel was there, and it was different, because Eddie was now making his incursion into Haymon turf, in the US. This time, he felt like Al was under pressure, to deliver.

Hearn continued–he says he usually works with manager Luis De Cubas in order to make PBC fights. “Me and Luis are on that wavelength,” he said, where they can just make things get done. Him and Luis would be making Wilder vs AJ, he thinks, more so than him and Al. Regarding Wilder…Eddie said in the last 18 months, Wilder has gotten much more exposed in America, in a good way. Wilder vs AJ is now bigger than it would have been, when they were trying to make it two years ago. Also, Eddie admitted, he wasn’t so much helping when he was needling “Shirley Winkel.”

But, you can’t just write boxing off, he said, because boxing was pretty dead in England…then Hearn started working harder, Ricky Hatton and then Carl Froch drew more buzz, then AJ came on the scene and “we made the sport sexy.”

“It worries me that someone like Wilder isn’t a star, he should be a star,” he said, in summation.

Readers, what is your take on Hearns’ thoughts….Tell us in the comments section.

The post Promoter Eddie Hearn says Al Haymon is a genius, but… appeared first on The Ring.