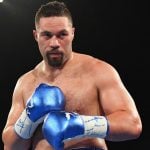 Along came a spider.

Yes, just when you thought you’d seen everything in boxing, you get a quick bout of arachnophobia as a wake-up call. Former WBO heavyweight titleholder Joseph Parker was on to the next step of his career rebuild, an intriguing clash with Britain’s enigmatic puncher Derek Chisora, and the winner was guaranteed another big fight. Everything was going to plan, but a redback spider hadn’t read the script.

“I trained for five or six weeks in New Zealand, but I was carrying this bite on my leg that caused a big hole,” Parker told The Ring. “I worked through it, but my body started failing me and the doctor said I could have been bitten by a redback spider.

“I had to take 10 or 11 days off because the infection went through my system. We had to postpone the fight and I was devastated because I’d wanted Chisora fight for a long time. He’d been keeping active, and I thought a fight like this would bring out the best in me. I was training very seriously, my diet was going well, but I didn’t want to take the fight at less than 100-percent.”

Parker, who is rated No. 8 by The Ring at heavyweight, held the WBO title from 2016 to 2018. The hard-hitting New Zealander outpointed reigning unified titleholder Andy Ruiz to claim the vacant belt and defended twice before losing on points to Anthony Joshua. A second decision defeat to Dillian Whyte was tough to take, but Parker has rebounded with two stoppage wins.

Liverpool’s David Price has stepped in to face Chisora this Saturday on a stacked card at the O2 Arena in London. Parker, 27, will be watching closely and still has crossed hairs locked on “Del Boy” should he defeat his countryman.

“I still want the fight now,” said Parker instantly. “If Chisora wins and we can get on a card before the end of the year, I’d love to fight him. I’ve only had one fight (this year) and I haven’t really been active. But I know what I can do in the ring.

“I’m just waiting to hear back from Matchroom, and I’ve already messaged them and said I’ve got clearance to fight from my doctor. I’m ready to go. I’m feeling a lot better after taking antibiotics, and all the stomach cramps and the pains in my neck and back are gone. I’m in full training.”