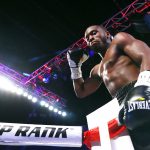 This was the young prospect’s first outing since the tragic bout with Patrick Day on October 12. Day was knocked out in the 10th and final round at the Wintrust Arena in Chicago that night. He was rushed to hospital but passed away four days later. Conwell took time off to grieve before returning to the gym.

Against Agaton, Conwell was just too strong, dominating the action from the opening bell. He immediately put his opponent on the defensive, initiating exchanges and attacking head and body.

By Round 3, Conwell was focusing almost exclusively on the mid-section. Agaton, a southpaw, backed away and was throwing one punch at a time, which did little to discourage his rampaging opponent. Defeated and exhausted at the end of that session, Agaton looked worse for wear when referee Mark Nelson stopped the fight after consulting a ringside physician.

“It was a perfect, low-key fight after what happened,” DiBella stated to The Ring Sunday morning. “Agaton was a tough kid. Charles looked comfortable and not gun shy. [It] was really encouraging and what we hoped for.”

IBF female junior welterweight titleholder Mary McGee of nearby Gary improved to 27-3 (15 KOs) by stopping Australia’s Deanha Hobbs (8-2, 5 KOs) in Round 8. McGee was making the first defense of her title she won by technical knockout over Ana Laura Esteche on December 5.

Christina Linardatou (13-2, 6 KOs), who is originally from the Dominican Republic and now resides in Athens, Greece, won the vacant WBO female junior welterweight title by defeating Prisca Vicot (11-2, 7 KOs) of France by 10-round unanimous decision. Linardatou had lost by decision in her previous fight to Katie Taylor on November 2.