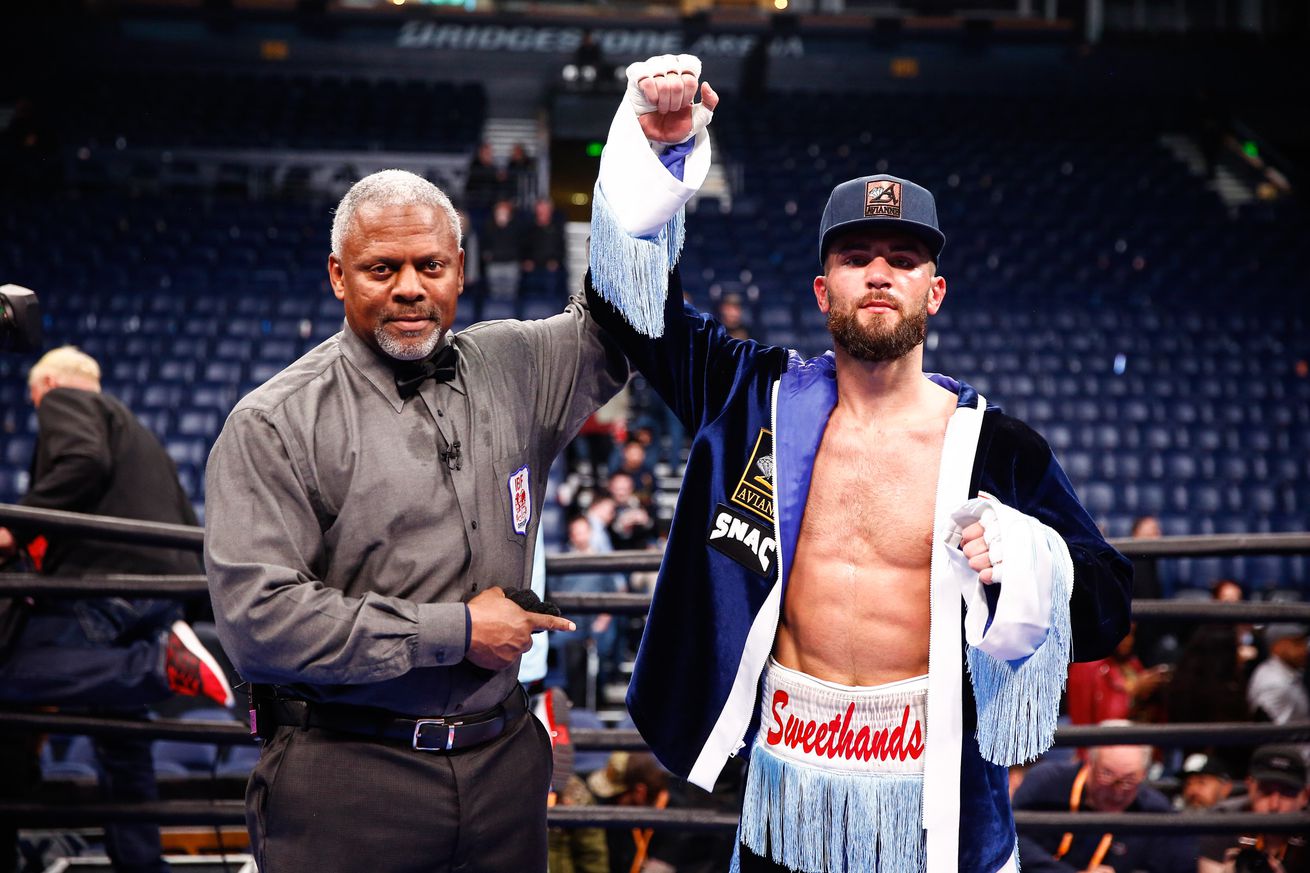 The IBF titleholder doesn’t sound interested in running right back into camp for what would be the biggest fight of his career.

Caleb Plant looked sharp and gave the fans in his hometown of Nashville their pound of flesh, stopping overmatched Vincent Feigenbutz Saturday evening in a FOX main event from Premier Boxing Champions.

The super middleweight titlist didn’t have all that much to analyze off this bout, his second IBF title defense, so naturally, he was asked about what might come next.

The names of David Benavidez and Callum Smith came up. Plant called Benavidez a C+ fighter and noted that Smith has been booed by his hometown fans and had a hard time with a lower-grade fighter or two. “I am the best 168 pounder,” Plant stated in his post-fight press conference.

Plant, you should know, is quite a skilled fighter. He gets props from people who are not easy to please, who know what they are seeing in the ring. The 20-0 (12 KO) fighter is superb at keeping the distance he wants, and with his next fight, depending on the perceived strength of opposition, will be making more pound-for-pound top 10 lists. He would not be favored to beat Canelo, but he would assumedly earn two or three or more times as much to fight the Mexican as he’s made in any other bout, and he’s 27, not a pup whose management feels needs seasoning.

So would he battle Canelo on May 2 in Las Vegas?

“How far away is May?” he answered, to Marcos Villegas. His nostrils flared ever so slightly, he honed in with his Manson lamps, his tone with Villegas a tick harsher than when he took queries from hometown paper types.

He continued: “We’re gonna get to (Canelo), he ‘sgot fights left on his contract. Why doesn’t he go and beat Billy Saunders and Callum Smith, and become unified, then I whoop on David Benavidez, and I become unified, and then we can fight for all the marbles? That sounds a little better to me.”

He makes some good sense in there. But the Canelo vs Plant idea stirred social media debate. Plenty of folks thought it sounded silly, saying that a May 2 fight was too soon to take on Canelo. Older fans, some of them, noted how often champs fought back in the day.

I took to Twitter and opined that I thought Plant makes sense with his reasoning, especially being that we heard from Sergey Kovalev, right after he fought Canelo and got stopped, sharing that he wasn’t feeling his best, because he was coming off a too-close camp and fight with Anthony Yarde.

Let’s look at that math. Distance between Kovalev-Yarde and Canelo-Kovalev was 70 days. And, for the record, Kovalev is 36 years old, had been a pro for 10 years, engaging in 38 bouts, and had been stopped twice in his previous six fights.

Distance between Plant-Feigenbutz and Plant-Canelo would be 77 days. On Twitter, some folks noted that Kovalev got buzzed bad by Yarde, while Feigenbutz didn’t seem to bother the Tennessean, who debuted pro in 2014, one small stitch.

If it’s money that matters, Kovalev got by far a career-high payday, and the same would be said for Plant, though likely not as high, because Kovalev is much more of a name at this juncture than is Plant.

Let’s stay on money for a beat. Plant is a PBC fighter, and no, we don’t see much inter-mingling between the PBC crew and the DAZN platformers. Eddie Hearn has tried to get Jermall Charlo over for a one-off in the DAZN pool, with no luck to this point. So, money matters, but sometimes politics trump currency.

Digging in more, I think it’s important to take in and accept the words and reasoning, in this case, of the athlete himself. Plant knows his body better than any of us do, and if he says that he needs more rest time in between fights, then that’s that. It’s his head as the possible piñata, not ours.

All told, I have to lean Plant, and accept his logic. He’s not wrong — he has a title, he has more leverage than he ever has, and it’s not BS. If some unifying goes on — Canelo beating Smith and/or Saunders, Plant beating Benavidez — then a Canelo vs Plant fight becomes much closer to a mega fight.

Problem with that it, you are inserting many variables into the mix.

Bottom line, I get it when you say, “C’mon now, Plant, you are a young and confident gun, if the offer is there to fight Canelo now, you take it, because tomorrow is promised for no being.” And I also get it if you say that Plant has earned the right to indulge in and enjoy the fruits of a virtue than can be hard to come by when you are the laboror, not the management.

Now, you all weigh in. Should Plant grab a chance to fight Canelo May 2, if that were offered, or is waiting not the hardest part, but the wisest course to take? Talk to me!