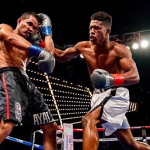 Go back, if you can, and listen to super welterweight Patrick Day speak before his fight with Charles Conwell.

To see the New York boxer, that open and happy face, and hear him say, when asked why he fights, “It’s about what’s in your heart, internally. I have a fighter’s soul, a fighter’s spirit and I love this sport.” And so, we can try to console ourselves, Patrick died doing what he loved, and perhaps that can serve as a salve to the grief, to the guilt, felt by his family, friends, and people attached to his career and this too often more-savage-than-sweet sport.

Day died on Oct. 16, a Wednesday, after being felled by Conwell during an Oct. 12th battle in Chicago, which screened on the DAZN platform.

Day was one of those types, they are fairly rare, who no one had a bad word about him when he died. So, the sting of his death is that much more potent. “Only the good…,” well, you know the line.

HBO’s “Real Sports” has a segment on Patrick, his legacy, and what his death does and should mean to the boxing community, coming out Tuesday, Feb. 25.

Correspondent Jon Frankel sat down with Patrick’s trainer, Joe Higgins, as well as Day’s three brothers, all of whom are grappling with Patrick’s death and the very existence of boxing itself.

Ex firefighter Higgins credits Patrick for doing so much of the heavy lifting to bring him out of a PTSD deep-dark funk, stemming from his time working the rubble at the World Trade Center site, following the Sept. 11, 2001 attack perpetrated by hijackers on a jihad mission. The kid lived across the street from Higgins, on Long Island, and snuck his way into his heart after he snuck into his garage, at age 14, to have a look at the boxing gear. On the HBO sports-themed show, Higgins relays that he was the last person to speak to Patrick, and reveals what he said. Frankel, left, is a New Yorker, who has done stories such as an investigation of the death of Arturo Gatti, for Real Sports. Trainer Higgins shared with Frankel the pain he sits with following the tragedy.

He’s able to chuckle some, happily, as he shares how Patrick was not the typical ragamuffin, who came to boxing to be saved. “Straight-A Day,” they tagged the lad, but the boxing had taken hold of his insides, and he was in love.

Pat’s three brothers, Bernard, Jean and Michael, helped Frankel make some sense of what it might feel like to see THAT happen to your brother.

“Real Sports” does probably deserve ample props for doing this report. Because it is the duty of people involved in boxing to hear from Higgins, talking about being in Patrick’s hospital room, and begging the kid to wake up. And get a clear picture of the scene in that rear view, after such a tragedy. Higgins lives across the street from the Days. So, on a daily basis, while all involved seek to restore an air of normalcy to their lives, surges of emotion are injected onto their minds and hearts. We all, in the sport, owe it to all of them, and the beings in the future, next week, or month, or three months down the line, who’ll be forced to deal with the same sort of sadness, to watch.

The post HBO’s ‘Real Sports’ running story on how loved ones deal with Patrick Day tragedy appeared first on The Ring.