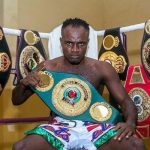 The 10-round bout will take place at the Warehouse at Magic City Innovation District in Miami, Florida and will headline a ‘Broadway Boxing’ card (UFC Fight Pass, 8:30 p.m. ET/ 5:30 p.m. PT).

The talented Ghanaian has not lost since his pro debut, when he was stopped by Lante Addy in June 2004. His most notable victories are over former world titleholders Mzonke Fana and Moses Paulus. An impressive victory over Perez could lead to bigger fights for Tagoe later this year.

“Tagoe is on the verge of a world title shot,” said promoter Lou DiBella. “(He) first must get past an experienced veteran in what promises to be a thrilling main event.”

The 31-year-old Tagoe has fought once before in the U.S., scoring a ninth-round stoppage over Gerardo Robles in August 2013.

Perez (24-11, 8 KOs), who is originally from Sindangan in the Philippines and now resides in the Los Angeles suburb of North Hollywood, lost a one-sided decision to unbeaten contender George Kambosos in his last fight on January 19 of last year. Prior to that setback, the 29-year-old defeated former world title challenger Roberto Marroquin and former prospect Christian ‘Chimpa’ Gonzalez.

Unbeaten welterweight Harold Calderon of Miami will face Argentina’s Gustavo Vittori (26-6-1, 12 KOs) in a 10-round bout. Calderon (22-0, 15 KOs), who is of Honduran descent, last fought on December 13, stopping Krisztian Santa in two rounds. He has won his last five bouts by knockout.

Welterweight Kali Reis (16-7-1, 5 KOs), who scored a knockdown of undisputed welterweight champion Cecilia Braekhus en route to a decision loss in May 2018, will square off against Mexico’s Alma Ibarra (7-1, 4 KOs) in an eight-round bout.

In a clash of unbeaten light heavyweights, Juan Carrillo (3-0, 2 KOs), who represented Colombia at the 2016 Olympic Games, will face Atlanta’s Demetri Bentley (8-0, 6 KOs) in an eight-round bout.

Unbeaten prospect Jose Roman (10-0, 5 KOs) of Bayamon, Puerto Rico will fight an opponent to be determined in a six-round welterweight bout.

The post Emmanuel Tagoe-Ray Perez set for Miami on March 12 appeared first on The Ring.