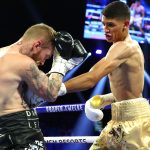 LAS VEGAS — The nickname certainly fits. Because anytime junior middleweight Sebastian Fundora steps into the ring, his opponents invariably look up at the 6-foot-5½ southpaw. Hence, the nom de plume, “The Towering Inferno.”

Daniel Lewis is listed at 5-foot-10, though next to Fundora, he appeared more like 5-foot-2.

How comical it may have appeared, it wasn’t. Fundora won a comfortable 10-round decision on the first PPV fight of the Deontay Wilder-Tyson Fury undercard Saturday night from the MGM Grand Garden Arena, in Las Vegas, Nev.

“I think it was a fair decision and a good fight,” Fundora said. “There were a lot of hard punches. I knew he would be tough. When they told me I was fighting an Olympian, I knew it would be a tough fight. He probably had more experience than me, but we prepared the right way and got the win.

“I always want to use my height and my physical gifts, but it just depends on the fight. If the situation changes, we have to be ready to adapt.

“Whether we’re fighting on the inside or the outside, I always want to be the busier fighter. The more punches you throw, the more you’re going to land. It’s the way I like to fight.”

There were occasions when Lewis got inside on Fundora, like the third round, when he sunk a left into Fundora’s ribs. Though Fundora appeared in control of the Australian through the first three.

Lewis made a great effort. But like every other opponent Fundora has faced, he couldn’t break that 80-inch reach to do anything effective.

Lewis left the ring with a bloody face, and Fundora left with another notch in the win column—and continuing questions as to how good this curiosity can be.

“I’ll have to talk to my team, but I want to keep facing the best competition possible and continue to grow in the sport,” Fundora said. Junior welterweight Petros Ananyan (15-2-2, 7 KOs) pulled off a mild surprise by beating previously undefeated Subriel Matias (15-1, 15 KOs) in a 10-round bout by unanimous decision. The decision was helped along when Matias was knocked down in the seventh round.