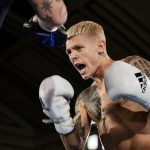 Former flyweight titleholder Charlie Edwards will make his ring return, this time at 115 pounds, against former title challenger Keyvin Lara on April 18 at York Hall in London in a bout that will be streamed live on ESPN+.

“I’m excited to get back into the ring and put the demons behind me. It’s been a mentally challenging time for me,” Edwards (15-1, 6 knockouts), 27, of the United Kingdom, said in a statement.

Edwards retained the WBC flyweight for the second time title last August after initially getting knocked out by Julio Cesar Martinez in a three round demolition. However, the loss was overturned to a no contest after it was determined that the final blow, a crippling shot to the ribs, which left Edwards unable to continue, landed while Edwards was down.

Edwards, who admitted that he struggled to make weight for the fight, opted to vacate the flyweight world title he won in December 2018 by outpointing Cristofer Rosales.

“I’m looking forward to having a real challenge because it will bring the best out in me on the night,” he continued. “York Hall is a great venue for me. I have boxed there many times throughout my career at all different stages and the atmosphere in that place is always amazing.

“I am looking to bounce back with a bang but it isn’t going to be a walk in the park because Keyvin Lara is a great, great fighter.”

Lara (27-3-1, 9 KOs), 25, of Nicaragua, is fresh off a six round unanimous decision victory against countryman Jose Rios after he suffered a loss to secondary 115-pound beltholder Yanga Sigquibo last December in South Africa.

The post Charlie Edwards set for return at 115 pounds against Keyvin Lara in London appeared first on The Ring.