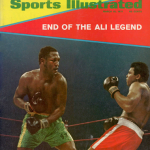 The directive to self doesn’t ALWAYS work, because, c’mon now, the man was a special breed of being.

There can never, there will never be another like Muhammad Ali.

OK, there were perhaps better pure boxers, arguably, but as an all-around specimen, as athlete/entertainer/icon, Ali is, was, and always shall be “The Greatest.”

So, if you say to yourself that you want to tweak your game, in the ring or as a persona, by adhering to a “What Would Ali Do?” mantra, good luck with that. Ali’s arsenal had too many facets, mere mortals could not and can not delude themselves into thinking they are at the same level as GOAT.

It isn’t a bad idea for a guy, like, say, a Deontay Wilder, to adhere to a “What Would Ali Do” mantra in CERTAIN situations. Like, say, after losing for the first time.

Ali had to deal with that, even though as a young gun he assumed that this would never be, that he’d never be faced with crossing that bridge. Ah, but on March 8, 1971, he collided with Joe Frazier, and for the first time as a pro, walked to the dressing room the loser. And he had to deal with it, had to make sense of of it, and had to answer questions from media and fans and family and himself, what does it mean to me to lose?

Gene Kilroy lives in Las Vegas, and acted as Ali’s business manager. You can see Gene when you watch The Rumble in the Jungle, he’s the light skinned guy with perm-y hair bounding into the ring–I think he might be the first guy in–and then putting on a “don’t eff with us” face as half the arena scrambles into the ring and tries to touch the God of pugilism. Kilroy and Ali’s lil bro Rahman, that’s the posse remaining, so, of course it was a pleasure and an honor to check in with Kilroy, and hear what he thought of the Deontay Wilder v Tyson Fury fight Feb. 22.

So, first, what was it that Kilroy did?

“What didn’t I do? I was his business manager…You gotta realize, the fighters, 95% of them only had an eighth grade education,” he said. “So I showed Muhammad about tax writeoffs, about bank accounts, investments, municipal tax free bonds.” Ali liked it when Kilroy told him that going to camp was a tax writeoff, a business expense. Ali had an A grade chin, and wasn’t afraid to take a shot, in the name of sapping the zest from a foe. But doing the Rope a Dope against the IRS, well, The Greatest preferred eating body blows from Foreman to seeing Uncle Sam help himself to seconds and thirds of the pie.

So…I told the Ali crew member that man, we could use Ali around today, to speak truth to power.

“He always had time for the poor, the powerless, the depressed, the deprived,” Kilroy recalls.

And some said Ali hated white people. “How do you explain me?” Kilroy would ask/tell ’em.

He shared that he’s retired, is scrapping with colon cancer, and he sounded sharp and passionate on the phone, on Feb. 25th.

And what of the Fury win? Kilroy thinks Wilder under-estimated Fury, and he shared that once a guy gets beaten, that saps something from him.  Foreman lost to Jimmy Young after Ali softened him up, Tyson got solved by Buster Douglas, and that took him down two notches, his impregnability was dunzo. “Fear is like fire, what can burn your house down can cook your food,” he said, and Wilder has to get a better handle on his emotions, he thinks.

And how did Ali act when Joe bested him? “Muhammad used to say, ‘Never do they alibi, or do they complain,”’ the Las Vegas resident, who was a favorite of fight fanatics when they visited the casino he worked at, told us. “After the first Frazier fight, ‘Joe won the fight, he beat me.’ The same thing with the Spinks fight. He always said, anyone who beat me, I cleaned the slate and I beat them. Except the last fight, should have never have happened in the Bahamas.”

Kilroy saw the Wilder loss, and he thinks if people really loved him, they’d tell “The Bronze Bomber” to take the money already banked, and call it a day. But Ali, he got advised to step away, but he adored the buzz, and the money wasn’t bad either. “Ali loved the crowd, he loved the people…all fighters, they beat everything but Father Time, and the heavy bag,” Kilroy said. He told Tommy Hearns, Evander Holyfield, etc, get out before you get kicked out, but guys have to learn the hardest lessons on their own. Same thing at the tables; boxing is gambling, the longer you stay, the more likely that the houses’ edge is going to come to the fore.

So, the night The Greatest could no longer say that without the possibility of someone hurling a verbal asterisk at him as a counter punch, Ali’s jaw was so hurtin’ from a Frazier left hook that he left the ring without doing what he did maybe better than fighting, talking. The morning after, select press surrounded the champ in his bed at the Hotel New Yorker. How does it feel, champ, they asked.

But let’s keep it real, Ali’s pride wasn’t stolen from Joltin’ Joe. He said that he thought he “won most of the rounds on points.”

But, he told the ink spillers, he wouldn’t beef with the decision. And, this wasn’t an excuse, but he did offer a semi-subtle reminder that he wasn’t at his best: “This is not an excuse but I’ve been off three and years. I wasn’t supposed to handle him that easy.” He mulled more, admitted Frazier hit like all the angry mules. “I’ve got my little family and my homes. The sun’s still going to be shining.”

Different media, during different sessions, got varied POVs. Another newsman wrote in his notebook that Ali said, “Well, this might sound funny, but it’s a good feeling to lose sometimes. When the champion loses, he’s an example to his followers, who all have to lose themselves as they go through life.”

Ok, and what maybe would Ali have said when he heard Wilder saying his costume sapped his legs? “Great fighters never alibi or do they complain,” Kilroy said. “People look for excuses when they lose, all athletes…” He had a suggestion for those that have Wilders’ ear. “Friends of Wilders,’ if they would tell him, ‘We don’t need this anymore,’ Kilroy stated, that would prove themselves to be real-deal buds.

Yes, Kilroy isn’t afraid to say it, those were the days. “If Ali and I had breakfast today, and we had the cameras there, we would outdraw your fights,” Kilroy would say to Floyd Mayweather when he saw “Money.”

We talked more about that age, and loyalty, and opportunists and the like. “When I was with Ali, I was too busy to do interviews….I was offered big money to write a book, I wouldn’t do it, my book is in my heart and my head…People know the story of what Gene Kilroy did, the inner circle knew what Gene Kilroy did,” he said. Ferdie Pacheco would come in three days before the fight, pay his own way in, but he loved to do interviews, and he was fine with it if media portrayed him as a camp mainstay. Kilroy only started do more chats with media after Ali retired.

That’s why I told him we’d be in contact more often, snag some more of those marvelous recollections. Young fighters might want to check back, see the next time Kilroy does the pod, because that’ll help them if they employ a “What Would Ali Do?” filter check for themself. Cough, Deontay Wilder, cough cough.

POSTSCRIPT: I was thinking about the meaning of losing, about how it is best handled. I wanted to finish this story up, I had a minor loose end to tie up. So, I messaged Gene Kilroy on Monday, very early evening, wanted to ask him what casino or casinos he was most associated with after Ali hung up those mitts.

He asked me how I was doing, I told him I had just cooked my 9 year old dinner. “Tofu, rice, broccoli, she liked everything but the rice, Gene,” I said.

And, I asked how he was doing. He’d been better, he admitted. His brother died, his twin brother, Billy. 84 years old.

Gene will go to the funeral Friday, outside Philly.

I hadn’t known Gene was a twin…identical?

“He was the opposite of me in everything,” Gene said. Brother Gene liked to rock and roll more, Billy was a sing in the choir type, more so. Billy was married to Ann for 55 years, for the record.

Gene wanted to switch topics, so I asked if it would be OK to use a pic off his website, him and Elvis. He liked E? “He was infantile, but a good guy,” Gene said. Ali used to tell Elvis to get out of the house more, mix with the people. “He was a prisoner of his own body.”

I had to make sure I conveyed my emotions, I could only imagine how it feels to hear the news, your twin brother will no longer be there to call, to rib, to be told that you love him.

“I woke up this morning, and I was hoping it was a bad dream,” Gene said.

“Mike, he was sick for six months. But he’s at peace now.”