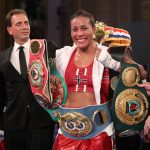 
The 10-round bout will take place at the MGM National Harbor in Oxon Hill, Md. The fight will precede the clash between former world junior welterweight titleholders Regis Prograis and Maurice Hooker.


Both fights will stream live on DAZN.

The 38-year-old will be defending her undisputed crown for the 10th time on April 17. A victory over McCaskill will break the record for most consecutive defenses of a world title belt (25), which was first set by heavyweight great Joe Louis.

“I’m very excited to battle Jessica McCaskill on April 17,” said Braekhus, who signed a promotional deal with Matchroom Boxing in October. “She is a unified World champion and a formidable opponent for me. However, following my victory in November, I only took a short time off from training and will be well prepared for this very tough challenge.”


McCaskill (8-2, 3 KOs) defeated Erica Farias of Argentina by majority decision in her last bout on October 12 in her hometown of Chicago. She has won her last three bouts since her decision loss to Katie Taylor in December 2017.


The 35-year-old has fought at the MGM National Harbor before, defeating Anahi Sanchez, who held the WBA junior welterweight title, by unanimous decision in a unification bout on May 25. McCaskill already owned the WBC title.


“This is a fight I wanted,” said McCaskill. “I want to fight the biggest names and the best fighters. Nothing less. My name is up there with the best in female history and I want to continue on that path. Every time I fight its exciting and not only for female boxing but for boxing – period.”