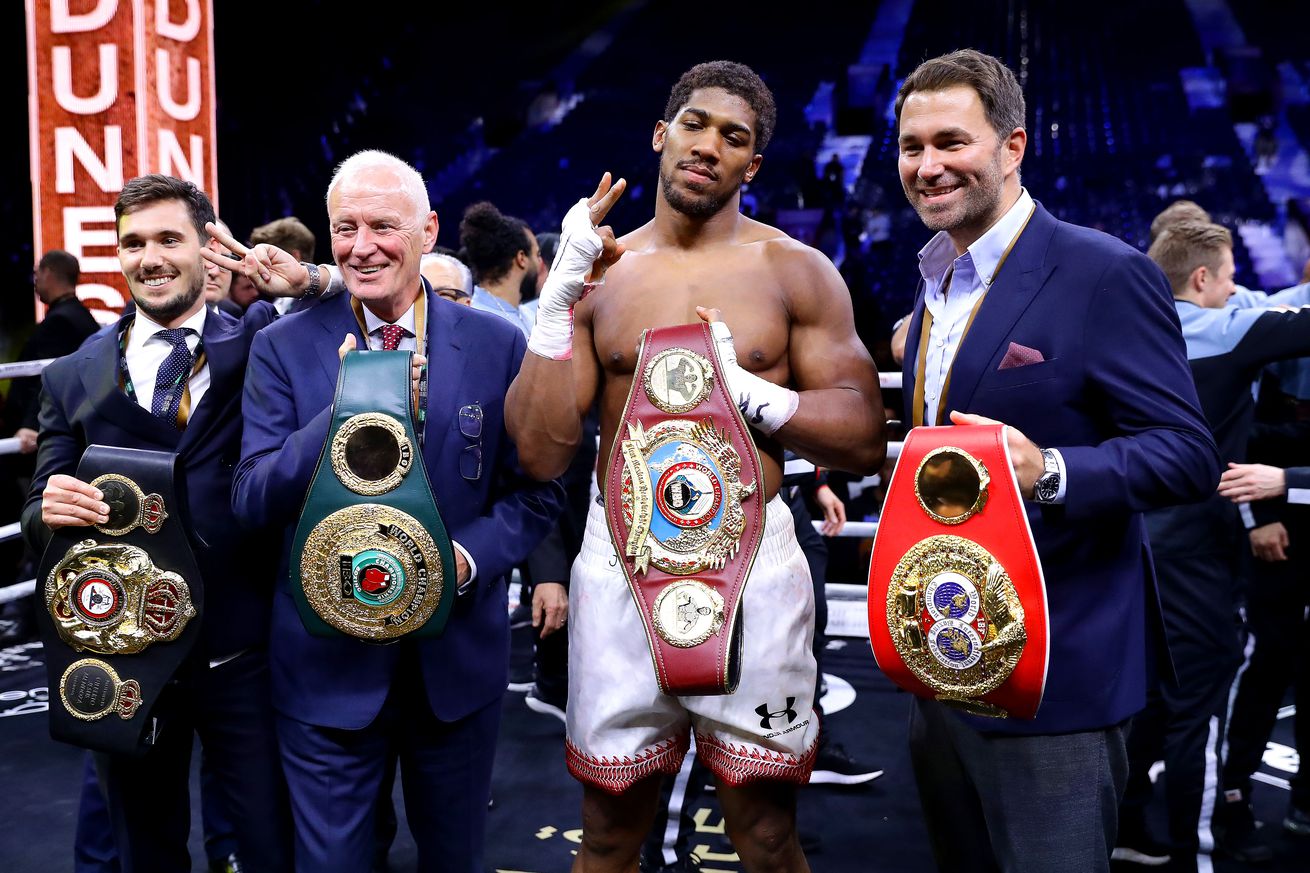 The British promoter is confident an undisputed heavyweight championship mega fight can get done.

Promoter Eddie Hearn sees big things coming in the heavyweight division — I mean, everyone does, the division is hot right now — and says there’s “no reason” that a fight between Tyson Fury and Anthony Joshua, potentially for the undisputed championship, can’t happen at the end of 2020.

Joshua-Fury negotiations ‘all positive’⁣ ⁣ "If Joshua fights Fury, the mandatory is Whyte" ⁣ ⁣ @anthonyjoshua and @gypsyking101 remain at the centre of talks to stage an undisputed title fight in 2020, and promoter @eddiehearn has described progress as "all positive".

“If Anthony Joshua fights Tyson Fury, the mandatory is Dillian Whyte,” Hearn said. “So you’re gonna have, effectively, an undisputed fight between two Brits, and then another Brit coming into the mix fighting for the undisputed world heavyweight championship, as well.

“British boxing is flying, but the heavyweight division in Britain is flying. You’ve got Dillian Whyte against Alexander Povetkin May [2], another little blockbuster set to be announced, [Oleksandr] Usyk against [Dereck Chisora] on May 23. Then you’ve got Anthony Joshua announced on June 20. So an incredible run over three months of top, top heavyweight fights, the best in the division. Then you’ve got probably Tyson Fury against Deontay Wilder in July.

“There’s no reason why a deal can’t be done now to lock in Tyson Fury and Anthony Joshua for that November or December date. Our conversations have been ongoing with Bob Arum, all positive, and I think it can be done.”

Fury (30-0-1, 21 KO) has said he’s looking to fight twice more before retiring from the ring, and we know he’s got Deontay Wilder in July in a third fight. A bout with Joshua (23-1, 21 KO) would be massive if both win their summer bouts, with AJ scheduled to face Kubrat Pulev on June 20.

As for getting the deal done, there’s no reason to suspect it can’t happen, honestly. Hearn has said many times that Joshua is free to fight on other platforms in the US if the right fight comes along, so Fury-Joshua could certainly take place through ESPN+ pay-per-view rather than DAZN, if need be (and most likely it would need be). Top Rank and Matchroom could work something out to send someone over to DAZN for a big fight, perhaps; we saw the two sides work together on a deal like that in 2019, where Matchroom’s Luke Campbell fought Vasiliy Lomachenko on ESPN+ and Top Rank’s Jose Ramirez fought Maurice Hooker on DAZN. Everyone did OK in the end.

Fury-Joshua, if both win their next outings, is the obvious mega fight to make in the division and the sport in general. Joshua would in theory still have a WBO mandatory in Oleksandr Usyk, but Usyk could probably be paid to step aside and make room.

In other words, for once, there’s solid reason to be optimistic. Hearn and Bob Arum don’t always have the best things to say about one another in the press, but they do work together when the fight is right, and this fight would be right.