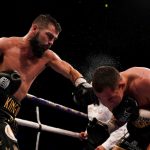 Carroll hurt Quigg with a left hand counter in Round 11 and a torrid follow up forced the gallant Englishman’s corner to throw in the towel. Trainer Joe Gallagher had given his fighter every chance and, if anything, the beatdown went on far too long.

“I feel like this is my time to shine,” said Carroll in his post-fight interview with Sky Sports. “Scott Quigg was one of my idols growing up and this is just a dream come true for a young kid.

“These feather fists have a little bit of power. I’m finally starting to do all the things I do in the gym and put it into practice. I used quality over quantity.”

Carroll, 27, got off to a great start, nailing Quigg to the body and crossing the left hand adeptly out of the southpaw stance. The Englishman got on the front foot in Round 2 but lacked the sharpness that was present in his junior featherweight heyday.

While Carroll (18-1-1, 4 knockouts) will never be a concussive hitter, his shots have a stinging effect and they’re both rapid and accurate. Quigg, 31, struggled with the speed and was made to flounder with counters when the Irishman used quick feet to drift off to the sides after letting his hands go.

A cut appeared near Carroll’s right eye at the end of the fourth but the wound was lateral and didn’t have an effect on the direction of the bout. The Bury man was being picked off with scores of sharp blows in the fifth and sixth and there was very little coming back.

Quigg (35-3-2, 26 KOs) was hurt by a right hook at the end of the eighth and it was painful viewing. Carroll’s lack of power only dragged out the torture because Quigg could withstand the punishment for a longer period. The stoppage was merciful and 100-percent justified.

“The better man won,” acknowledged the loser. “After the fourth round it didn’t feel like it was there. Fitness-wise and conditioning-wise it was no problem, but the timing wasn’t there.”

Quigg, a true warrior, was close to tears as he half-heartedly announced his retirement to the Manchester crowd. Former heavyweight title challenger Hughie Fury blasted out Czech Republic’s Pavel Sour in the third round of a scheduled 10. Fury (24-3, 14 KOs) went through the repertoire, switching stance effortlessly and landing a variety of power shots. A big right stunned Sour (11-3, 6 KOs) early in Round 2 and the very same shot decked him as that session came to a close. It was easy work and Fury closed out with another explosive right-hand knockdown early in the third. The corner had seen enough and threw in the towel, prompting referee Steve Gray to call a halt at 0:24. Unbeaten super middleweight Zach Parker scored a crunching 11th-round stoppage of Australia’s Rohan Murdock. Ahead on points in the penultimate round, Parker stunned the visitor with a sharp left out of the southpaw stance. Following up as a lefty, the 25-year-old from Derbyshire, England, released a powerful two-fisted assault culminating in a huge left hand that decked Murdock (24-2, 17 KOs) heavily. Referee Phil Edwards stopped the bout when the stricken fighter struggled to find his feet. The time was 2:58.