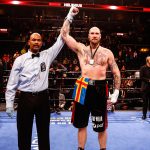 The jumbo Polish American insisted he’d learned his lesson from his last scrap, against an older gent with still ample energy.

Oh, but the hardest lessons usually get learned the hardest of ways; in round four of a scheduled 12, a sharp right sent the Kownacki, The Ring’s No. 9-rated heavyweight, to the mat. He got up, but “The Nordic Nightmare” had the presence of mind to press his advantage. He went at the Pole, and his strength and the fact that Kownacki wasn’t defending himself adequately forced the ref to hop in and end it. Kownacki had hit the deck two plus minutes in, but it was ruled a slip in that fateful fourth. The 6-foot-3 PBC boxer got up, got right back to work, but Helenius, 6-foot-6 1/2 with Viking blood coursing inside his vessel, knew his foe was buzzed. He pushed the Pole back, slid in a right cross, and added a left hook as the loser started to go down. Kownacki beat the count, but his legs were iffy and his senses still scrambled. Helenius started as a pro in 2008, he knew the drill. The winner sharked Kownacki, flurried, pushed him back, and the ref saved the New Yorker from more punishment. The time: 1:52, the was the official marking of AK’s nightmare ending.

Kownacki spoke right after the shocker ending. “It wasn’t my night. It’s boxing. It’s a tough sport and things just didn’t go my way tonight,” he said, all class, not resorting to any excuses. “It was a learning experience and I’m going to go back to the drawing board and get back to work.

“He hit me with a good shot. I knew what was going on, but I’m just upset with myself. It is what it is.”

The Sweden resident spoke in center ring after the stoppage: “I want to thank everyone who gave me this opportunity. Kownacki is a tough fighter. I worked hard in training camp and it paid off.

“I knew that I hit him hard and I knew I just had to continue. I knew he was still hurt after that punch,” he added.

“He just kept coming and coming. He’s a good fighter, I have to give it to him. My strength is to punch back when people come at me. It was a good fight and a tremendous opportunity for me to be here,” said Helenius.

This was billed as a WBA heavyweight title shot eliminator, for the record.

Kownacki, a Poland native who came with mom and dad to Brooklyn as a kid, scaled at 265 pounds. He came to the show declaring that he’d stepped it up in camp, eating smarter, training harder, after admitting that he’d underestimated his last foe, veteran Chris Arreola. He’d not do the same with another ultra vet, Helenius, he told media during this fight week and during a media session at Gleason’s Gym on Wednesday.

The 35-year-old Helenius (29-3 entering) hit 238 pounds at the Friday weigh in, and seemed mentally dialed in this week. At Gleason’s, he told media that he’s been campaigning injury free for a couple years, and thus was seeing himself as an 80-20 favorite.

He took to the ring in a black terry cape, to foreboding music, and offered a WWE heel sneer to snare maximum boos from the red shirts in the stands. Those same beings, they might have made up 35% of the total watchers in attendance, drowned out Jimmy Lennon when he told them that their guy entered at 20-0. “The popular, and the undefeated,” Lennon said, to passionate partisans.

In the first, Helenius (below) started with the right idea, working from outside, targeting the lower torso. Kownacki won the last 2/3 of the round with his own body-centric launches and superior volume. In the second, we didn’t hear to bell to end the round, as the AK fans screamed their lungs out. His power shots five times had his peeps yelling in affirmation. Helenius started opening up more, because he had to fight back.

In the third, AK went high-low, high-low, and maybe surprised the Finnish born underdog with his hand speed, and ability to uncork a telling combo. The Kownacki crew in the stands were feeling like a stoppage was imminent, their guy was picking up steam, he looked to be sharp on this night. The stoppage win that had eluded him in his last outing, against Arreola, it felt like it was going to be in the offing.

In the fourth round, we were reminded, again, the underdogs, even ones that are obviously diminished from their prime, got bite.

The post Helenius stops Kownacki in round four, shocks passionate Poles at Barclays Center appeared first on The Ring.