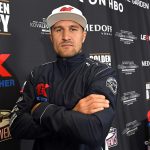 The 12-round cruiserweight bout will take place at the Fantasy Springs Resort Casino in Indio, California and will headline a huge fight card, which will include three world title fights. The fight card will stream live on DAZN.


The clash between Kovalev and Barrera has huge implications as the winner will breath some life to his career and remain relevant in the division after both suffered losses in their last fight.


Kovalev (34-4-1, 29 knockouts), who grew up in Kopeysk, Russia and now resides in Fort Lauderdale, Fla., was stopped in his last bout on November 4 at the hands of Canelo Alvarez in a competitive fight. As part of the deal with Kovalev and Main Events prior to the Alvarez fight, Golden Boy held an option on Kovalev, which they exercised for this fight.

Promoter Kathy Duva admitted a fight between Kovalev and Barrera had always been discussed but was never made prior to Barrera’s contract with Main Events expired in November 2018.

“Because Sullivan Barrera spent most of his professional career with Main Events, a fight between Kovalev and Barrera is something that we naturally anticipated would happen for a very long time and so here we are!” said the 2020 Hall of Fame inductee. “This is a really solid fight between two action fighters who have never turned down a challenge.”

The 36-year-old Kovalev has dealt with legal issues over the last several months. He was arrested in June 2018 for allegedly assaulting a woman in her Big Bear Lake, California home, severely injuring her. He has plead not guilty to the charges and a trial is scheduled to begin reportedly this summer. Two weeks ago, Kovalev was arrested in the Los Angeles area for DUI.


Barrera (22-3, 14 KOs), who is originally from Cuba and now resides in Miami, Florida, has not fought since losing by unanimous decision to Jesse Hart on June 15. The 38-year-old has lost two of his last three bouts.


In his last bout on Nov. 30, Teixeira (31-1, 22 KOs) rallied from an early deficit to win a hard-fought unanimous decision over Carlos Adames of the Dominican Republic. Days later, the WBO elevated the Sao Paolo, Brazil resident to full titleholder.


Castano (16-0-1, 12 KOs), who resides in Buenos Aires, Argentina, last fought on November 2, stopping Wale Omotoso after the fifth round. In his previous fight on March 2 of last year, the Castano fought to a split-decision draw against Erislandy Lara.

The Ring No. 1 rated strawweight and WBC titleholder Chayaphon Moonsri (aka Wanheng Menayothin) will make another defense of his world title belt against Marco J. Rementizo of the Philippines.

Moonsri (54-0, 18 KOs), who resides in Bangkok, Thailand, signed a promotional deal with Golden Boy in July. His bout against Rementizo will mark the 13th title defense.

Rementizo (12-3, 9 KOs) has won his last four bouts since losing by decision to Tanawat Nakoon in October 2018.

Alvarado (35-2, 30 KOs) defeated Reiya Konishi by unanimous decision in his last bout on May 19. Kriel (16-1-1, 8 KOs) knocked out Jesus Aguirre in the opening round of his last bout on November 30, but he is best known for his come-from-behind knockout victory over Carlos Licona on February 16 of last year, winning the IBF 105-pound title in the process.


Felix’s twin brother Rene will also fight on the Golden Boy card, squaring off against Venezuela’s Roger Gutierrez (24-3-1, 20 KOs). Alvarado (32-8, 21 KOs) stopped Andrew Cancio after round 7 of his last bout on November 23.


Both Felix and Rene Alvarado reside in Managua, Nicaragua.

The post Sergey Kovalev returns against Sullivan Barrera on April 25 appeared first on The Ring.