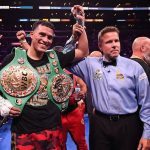 David Benavidez will defend his WBC super middleweight title against once-beaten Roamer Angulo on April 18, it was announced Monday afternoon.

The 12-round bout will take place at the Arizona Federal Theatre in Benavidez’s hometown of Phoenix, Arizona and will headline a three-bout Showtime telecast (10 p.m. ET/ 7 p.m. PT).

Benavidez (22-0, 19 knockouts), who is ranked No. 1 by The Ring, won the WBC title in his last bout on September 28, stopping Anthony Dirrell in round 9 in a one-sided fight.

This is the 23-year-old’s second time as the WBC titleholder. At the age of 20, Benavidez won the vacant title by defeating Ronald Gavril by split-decision in September 2017 and easily retained it in the rematch over five months later.

Benavidez was stripped of the title in September 2018 after testing positive for benzoylecgonine, a banned substance. The test was conducted by the Voluntary Anti-Doping Association (VADA), which the WBC mandates for all world titleholders.

After apologizing for testing positive and serving a four-month suspension by the WBC, Benavidez is eager to face the best fighters at 168 pounds. There has been talk of a possible unification bout later this year with IBF titleholder Caleb Plant, but Benavidez is focused on Angulo and putting on a solid performance before a hometown crowd on April 18.

“I’m very excited to be fighting Angulo on Showtime and in front of my hometown crowd,” said Benavidez, who is promoted by Sampson Lewkowicz. “I haven’t fought in Phoenix in five years. It’s exciting to be back.”

“I expect Angulo to come in ready. I know he just pulled an upset in his last fight and he’s not taking any shortcuts, but neither am I. Angulo has never been stopped, so I want to be the first person to stop him. I feel like I’m more motivated with a hungry fighter like him in front of me, and you will see it in my performance.”

Angulo (26-1, 22 KOs), who is originally from Colombia and now resides in Miami, Florida, defeated previously unbeaten Anthony Sims by split-decision in his last bout on January 30.

The 35-year-old has won his last three bouts since suffering his only loss at the hands of then-WBO super middleweight titleholder Gilberto Ramirez in June 2018.

Despite being the underdog, Angulo is confident he can pull off the victory over Benavidez.

“I’m very motivated by this great opportunity to fight for the world title again,” said Angulo. “Benavidez is a talented world champion who is clearly one of the best super middleweights in the world. This is going to be a great fight for the fans because of the style I bring to the ring. My Mexican style of fighting will be too much for Benavidez and I will have my hand raised on April 18.”

Two undefeated fighters from the Dominican Republic will also see action on the Showtime telecast.

In the co-feature, lightweight Michel Rivera will face Marcos Villasana, Jr. in a 12-round bout.

Rivera (18-0, 12 KOs), who is also promoted by Lewkowicz, stopped Fidel Maldonado during the final round of his last bout on February 1.

Villasana (25-6, 14 KOs), the son of former world titleholder Marcos Villasana, Sr., knocked out Javier Franco in round 4 on August 17. The Acapulco, Mexico resident has won his last 10 bouts.

In the opening bout telecast, Alberto Puello (17-0, 9 KOs) will square off against Las Vegas-based Rances Barthelemy (27-1-1, 14 KOs) in a 12-round junior welterweight bout.

Francisco A. Salazar has written for RingTV since October of 2013 and has covered boxing in Southern California and abroad since 2000. Francisco also cover boxing for the Ventura County (California) Star newspaper, Boxingscene, and FightNights.com. He can be reached by email at santio89@yahoo.com or on Twitter at FSalazarBoxing