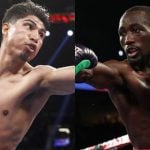 Nearly two weeks after telling a reporter that he was not interested in promoting a fight with Mikey Garcia, Top Rank chairman Bob Arum has had a change of heart.

Undefeated welterweight titleholder Terence Crawford, who is promoted by Arum, badly wants a significant fight, so much that he’s willing to crossover into MMA to get the recognition he deserves.

When asked what it would take to make a fight between Crawford and Garcia a reality, Arum told The Ring exclusively on Thursday that his line is open.

“(Garcia) has to call me,” Arum said. “The fact that Mikey thinks we have some differences with him is crazy.” Garcia (40-1, 32 knockouts), 32, of Moreno Valley, California, who previously fought for Top Rank, sued the promotional company in 2014 to get out of his agreement because he was unhappy with his purses. He ended up spending two-and-a-half years on the sidelines before both parties reached a settlement.

However, last week, after dropping Jessie Vargas en route to a unanimous decision at The Ford Center at The Star, Garcia told The Ring that he was open to fighting Crawford and hoped any past differences between he and his previous promoter would not get in the way.

For Arum, this was great news.

“We had a dispute a couple years ago, but in boxing, you don’t hold grudges,” he added. “We’re happy to talk to Mikey about fighting Terence Crawford.”

Arum initially told FightHub’s Marcos Villegas that he was not interested in promoting any fight involving Garcia because his financial demands were too steep. However, he has since walked back his comments

“Let him talk to us, and let’s see if his financial demands are unreasonable or not,” Arum said. “It’s unfair for me to say that they are without even talking to him.”

“We’re working on a couple of opponents. If Mikey is available, I would love to do that fight.”

Crawford, who knocked out Jeff Horn to win the WBO belt in June 2018, has not fought since December when he stopped two-time Olympian Egidijus Kavaliauskas at Madison Square Garden in New York City.

The post Bob Arum: ‘We’re happy to talk to Mikey Garcia about fighting Terence Crawford’ appeared first on The Ring.