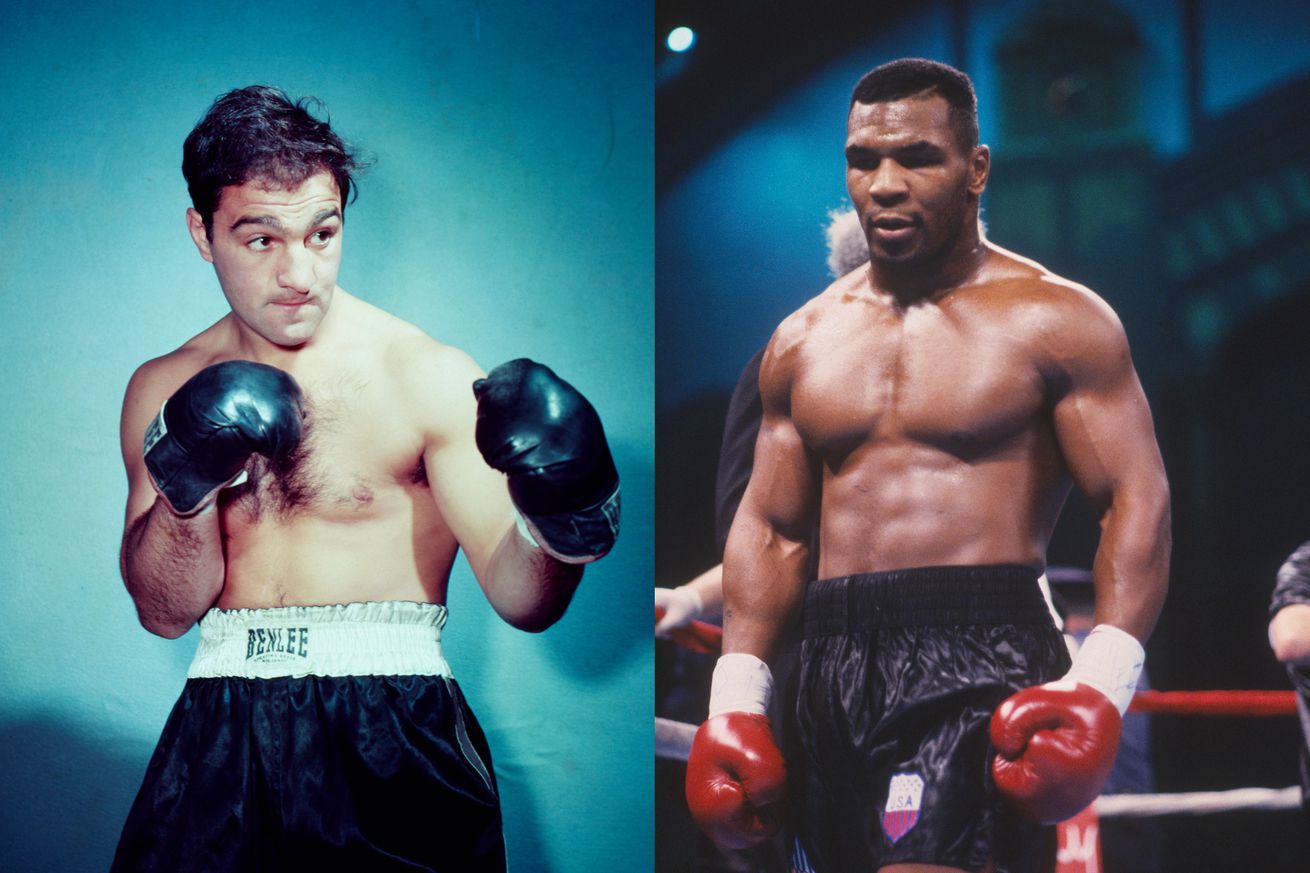 Who wins between “The Brockton Blockbuster” and “Iron” Mike?

Now that our March Mania fantasy boxing tournament is done and dusted, it’s time to move back to REAL boxing!

There still isn’t any, and there’s probably not going to be until at least June.

Well, we gotta talk about something. Boxing. Fantasy boxing.

Let’s get into one of my personal least favorite things about talking boxing: historical fantasy matchups.

I didn’t always hate these, mind you. But after years of telling people I write about boxing, I can’t even put into words how much I hate drunk people asking me, “Ali or Tyson?” with the full confidence Tyson is the next option on the list after Ali. Even worse are the people who kinda know a little what they’re talking about because they used to watch boxing, and have hazy memories of it. You can’t shut those guys up. (It’s always guys. Women do not do this in my personal experience, because when I tell women I write about boxing they go, “Boxing? Like (imitates punching) boxing?” and then they go talk to someone else.

But these are strange times, my friends, so to hell with it, let’s talk fantasy matchups, and we’ll start in the glorious heavyweight division.

Why this matchup? People have romanticized both fighters so long that the memories of them probably only kind of match the realities. Marciano still comes up a lot; “The Brockton Blockbuster” fought from 1947-1955, dying young at age 45 in a 1969 plane crash. He’s part of American folklore, the heavyweight champion who was never beaten in 49 fights.

So, too, is Tyson, just from a more modern time. The 20-year-old Mike Tyson passed the eye test easily, and his results backed it all up. He was ferocious, had the look of a menace when he stepped into the ring. In many ways, he was a throwback to a bygone era.

I also like this matchup more than I do either of them against Ali or the more modern heavyweights because it somewhat avoids the incredibly dull arguments about how tall or large heavyweights have been in different eras.

By modern standards, Marciano (49-0, 43 KO) would’ve been tiny at heavyweight. Listed at 5’10½” with a 68-inch reach, Marciano consistently weighed around 185-190. In today’s world, he’d either be an American cruiserweight traveling around Europe looking for fights, or he’d cut another bit of weight and fight at light heavyweight. And he’d often be short at either of those classes anymore.

Tyson, though, was also no Andre the Giant or anything. At 5’10” with a 71-inch reach, Tyson in peak form weighed about 215-220. Any heavyweight after Marciano’s era is going to have weight on him, if you don’t imagine him bulked up a bit with modern science or whatever, but of the modern greats, Tyson (50-6, 44 KO) is about as close a physical matchup as you’re going to get.

Style-wise, Marciano was a swarming, pressure fighting brawler, but he had the fundamental skills that all good fighters had in his era, and the hardness of that era. Tyson had some old school craft to his game and wicked power. Psychologically, he beat a lot of his opponents before the fight even started, but not all of them.

So you make the call: Marciano or Tyson, prime versus prime, head-to-head?