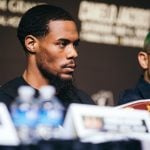 The two fighters were slated to square off on March 19 in a 10-round junior lightweight affair at the Avalon in Hollywood, Calif., as part of promoter Golden Boy’s “Thursday Night Fights Series,” but the coronavirus pandemic postponed the card.

Tabanao (17-7, 11 KOs), 25, of the Philippines, has lost six of his last 10 fights. However, one of those defeats came at the hands of former titleholder Isaac Dogboe, in August 2016, when the Ghanian was a prospect.

The 24-year-old Roach (19-1-1, 7 knockouts) is coming off his first loss as a professional when he was outpointed by 130-pound titleholder Jamel Herring. However, it didn’t come without its moments for Roach, who badly rocked the champion in the 11th round.

After coming out on the raw end of a close fight, Roach says he will press for the knockout when given the opportunity again.

When told that social distancing is not a skill that most fighters are accustomed to practicing, Roach laughed and explained how he is managing to work out amidst the chaos.

“I’ve been working out in the basement and outside with a mask and gloves on,” Roach said. “We do strength and conditioning outside where not a lot of people are and use any available objects. If anyone thinks I’m slipping, they’re mistaken.”

Roach is urging everyone to stay inside and to follow government orders so people can get back to work.

“There would be less cases if people just stayed inside,” he added. “If people did that, there would be more time to develop a cure and handle coronavirus.”