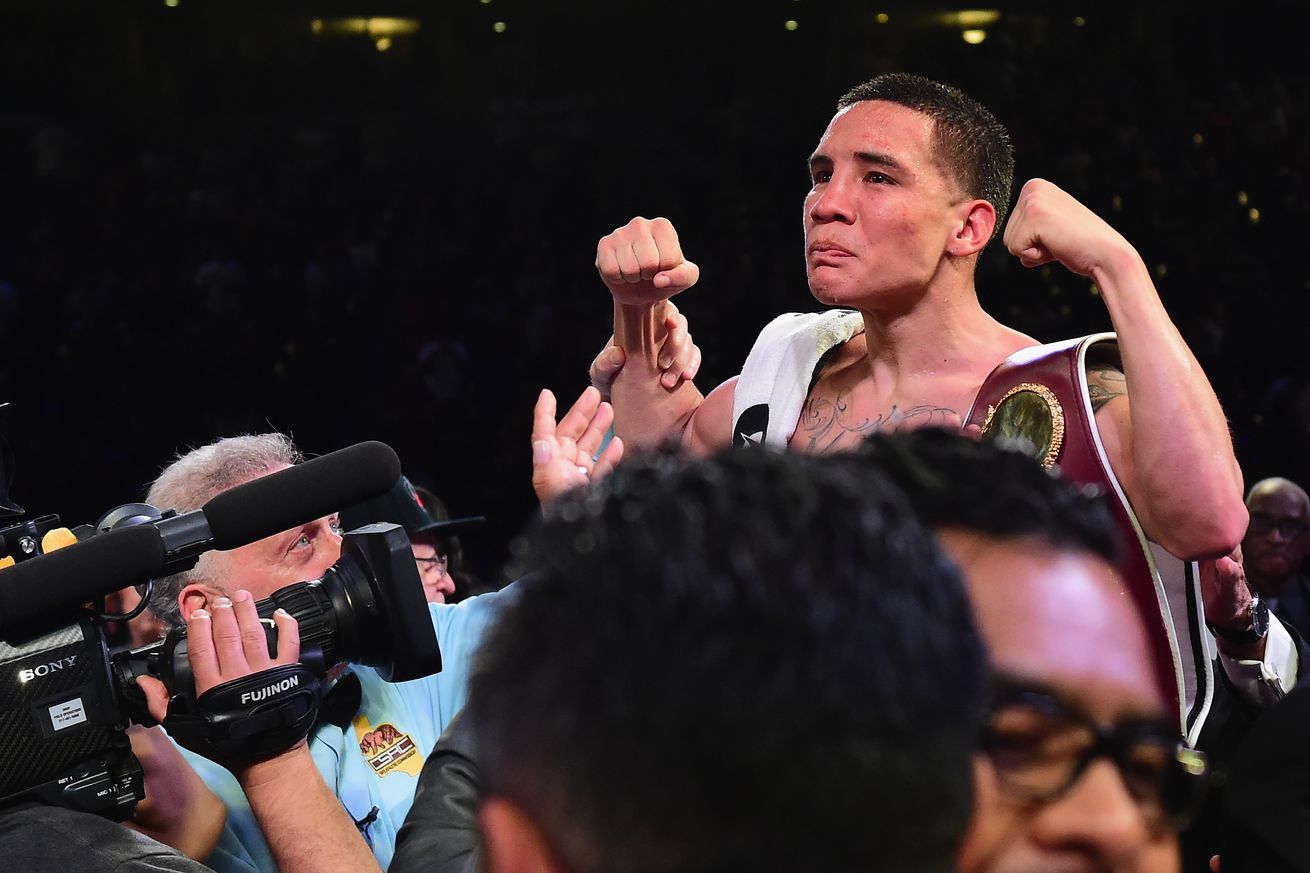 The former featherweight titleholder still has the big fight with Miguel Berchelt as his focus.

Former WBO featherweight titleholder Oscar Valdez made his move up to 130 pounds last November, struggling a bit but earning a seventh round TKO win over late replacement opponent Adam Lopez in Las Vegas.

Attention then immediately turned to Valdez possibly facing Mexican countryman Miguel Berchelt, widely considered the top junior lightweight in boxing today, and the reigning WBC titleholder at 130. The fight was expected to happen this spring, but like everything in boxing, plans were postponed by the COVID-19 pandemic.

“We only have one fight on our mind, which is ‘Alacran’ Berchelt,” Valdez told Top Rank’s Crystina Poncher. “I’m the mandatory challenger, it’s a mandatory fight. There was rumors it was going to be May 9th, so I was already back in San Diego in training for May 9th. Then we got the news they gave that fight date to Jose Ramirez and Viktor Postol, but we just continued training.

“Then we started hearing this news that the coronavirus was growing and these fights were being canceled. But we’re already thinking about ‘Alacran’ Berchelt, for sure.”

The Berchelt-Valdez was never officially announced, but Valdez stresses that it’s still the plan, as he doesn’t plan to wait.

“It’s a mandatory fight, the fight has to happen,” he said. “On our side, we’re ready to sign the contract. I’m going for my dream, I want that belt. We want to make it official now. I was already training for that fight, but right now we just gotta train back home. It is what it is, we just gotta stay focused right now. We can’t do much but train as much as we can and wait for the big news.”

Berchelt (37-1, 33 KO) will surely be the favorite, but if/when the fight happens, it will be interesting to see if the 28-year-old titleholder’s superior natural size and power will drag the warrior out of Valdez, who has tried to get to a more balanced approach working with trainer Eddy Reynoso alongside Canelo Alvarez.

As for working with Canelo in camp, Valdez has nothing but good things to say about the experience.

“It’s been pretty cool, just because we have the same energy,” Valdez said. “We all have the same energy in the gym, we all carry a nice vibe. When you have a guy like Canelo training at the gym and other fighter slike [Luis] ‘Panterita’ Nery, [Julio Cesar] ‘Rey’ Martinez, Ryan Garcia — we just carry a good vibe in the gym.

“There’s been, like, two or three times already where I’ve trained side-by-side with Canelo, and it’s motivating, because in certain ways it’s a competition. He hits the bag 10 times, I want to hit it 11 times, 12 times. It’s pretty cool to train with fighters who all have the same dream.”