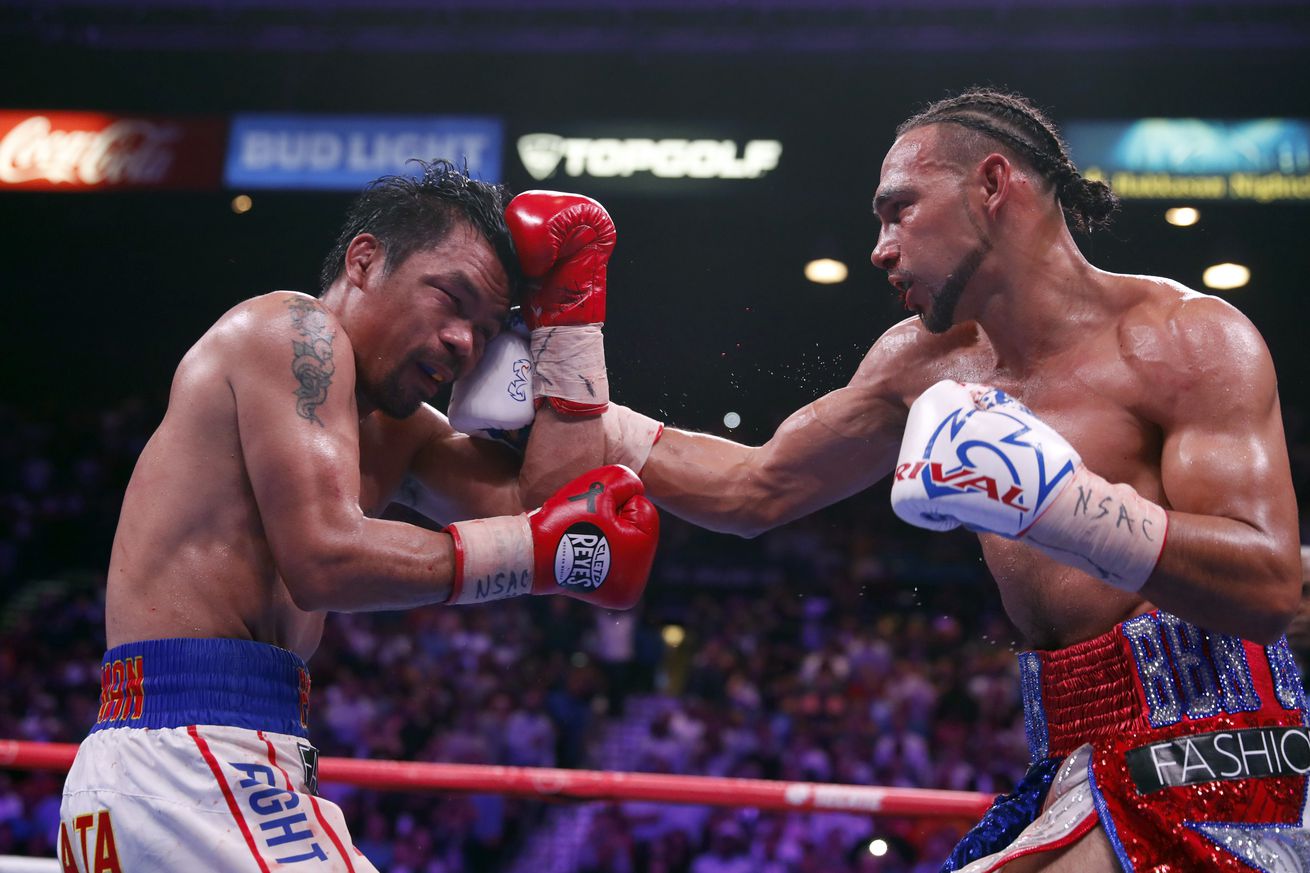 Keith Thurman wants to face Manny Pacquiao again, and also understands that Errol Spence Jr is in a position of power at welterweight right now.

Former welterweight titleholder Keith “One Time” Thurman is like everyone in boxing right now, stuck on the sidelines and waiting to find out when the next fight might come along.

Unlike many, Thurman (29-1, 22 KO) was already on the shelf after undergoing hand surgery last year, following his July loss to Manny Pacquiao. He was hoping to fight twice this year, but with the COVID-19 pandemic shutting the sport down, he now just hopes he’ll be able to get in one bout.

“Let me get in the ring in November or December,” he told PBC’s Ray Flores in an Instagram Live chat. “It’s not that I don’t want to come back sooner, but there’s going to be a delayed process. We’re talking hypotheticals. Sports is gonna be one of the last things to come back around. You’re talking about arenas. Concerts and sporting events are gonna be some of the last things to come around.

“With that understanding, then the delay effect of ‘these fighters are supposed to get their fights,’ these fighters that got pushed back — when are they gonna fight? There’s a part of me that would just feel grateful to perform this year.”

As for coming back to empty venues for fights, Thurman didn’t sound particularly interested, saying it takes the energy and significance away from a fight night. More specifically, he said he wouldn’t want to do a championship fight in that setting, but as he also noted, we’re talking hypotheticals here. At some point, there may be no choice.

And while Thurman, 31, didn’t expect to get an immediate rematch with Pacquiao (62-7-2, 39 KO) after their fight last year, he now thinks that’s on the table, and he wants it.

“I understood after my hand surgery he would most likely fight before I was prepared to be in the ring,” Thurman said. “Now we’re looking at a situation where we’ll both be ready. The ball’s in his court. I just don’t see somebody else really giving him a great fight. I also believe I deserve the rematch, from being the undefeated welterweight champion at the time. It wasn’t in my contract, but everything’s up for negotiation.”

IBF/WBC unified titleholder Errol Spence Jr was also brought up, as in a chat with Flores last week, Spence was cold to the idea of fighting Thurman, calling him “fake” and saying that when Spence was on the way up and Thurman had a title, Thurman didn’t give him a shot, so why should he give one to Keith now?

Thurman took the high road on that one, saying, “He’s in a power position, so he has the luxury to say whatever he wants. He holds power by being a unified champ. I respect that, I know what it’s like to be in that position.”

Thurman related his own stories of having called out Floyd Mayweather and Manny Pacquiao for a long time, and never getting a fight with Mayweather, and only facing Pacquiao years later. He also remembered when Shawn Porter won the IBF title in 2013, and Shawn’s father Kenny Porter said they had no reason to fight Thurman, and would only do so once Thurman got a belt of his own.

Fast forward a few years, and Thurman had the WBA belt, while Porter had lost his title. Thurman took the fight in 2016, saying he was confident he’d have beaten Shawn Porter before, and maintained that confidence then.

It’s really anyone’s guess when we’ll see Thurman back in the ring. As he said, boxing is going to have a weird and staggered return process with fights that were signed being postponed. That could mean we’ll get some packed cards, but it’s at least as likely that we’ll see a lot of guys taking tune-ups when they return, too, and trying to fill as many weekends as possible, which just sort of continues the delay of where the sport should have been.

But Thurman clearly still believes he’s got a lot more to give in the sport, and says his number one priority, after years of nagging injuries, is staying healthy and getting active again.