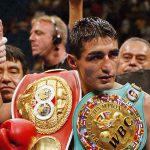 Morales, of Mexico, who manages a $3.5 million budget as the Director of Parks and Recreation in Tijuana, told ESPN that he started distributing groceries in Mexicali, Tecate, Ensenada, and Rosarito on Monday, and will expand his operation to other areas by the end of the week.

Morales isn’t the only former champion to assist those in need. Orlando Salido, who won titles at 126 and 130 pounds, announced last week that he would donate his salary as an elected deputy of the Sonora state legislature to help families impacted by the coronavirus.

“Seeing this situation with COVID-19 — that they’re sending everyone home and people need something to bring home, but how there’s nothing, they’re closing all the factories, the businesses — we wanted to contribute something to help alleviate the burden during this contingency period,” Salido said.

Salido (44-14-4, 31 KOs), 41, is credited with handing Vasiliy Lomachenko his only professional loss to date and also knocked out Juan Manuel Lopez twice. He said he would like to see others in the boxing world to do their fair share.

Morales stepped up to the plate.

“The idea is to help those in need,” Morales told ESPN. “The contingency is affecting everyone in one way or another.”

Morales (52-9, 36 knockouts), 43, whose Hall of Fame career included two trilogies against the likes of Marco Antonio Barrera and Manny Pacquiao, along with a plethora of other wars, wasn’t about to let inclement weather deter him from delivering essential supplies to those in need.

Morales and his staff distributed beans, cleaning supplies, coffee, pasta, and rice. Furthermore, he is also considering a charity boxing exhibition bout against Barrera to raise money for COVID-19 victims.