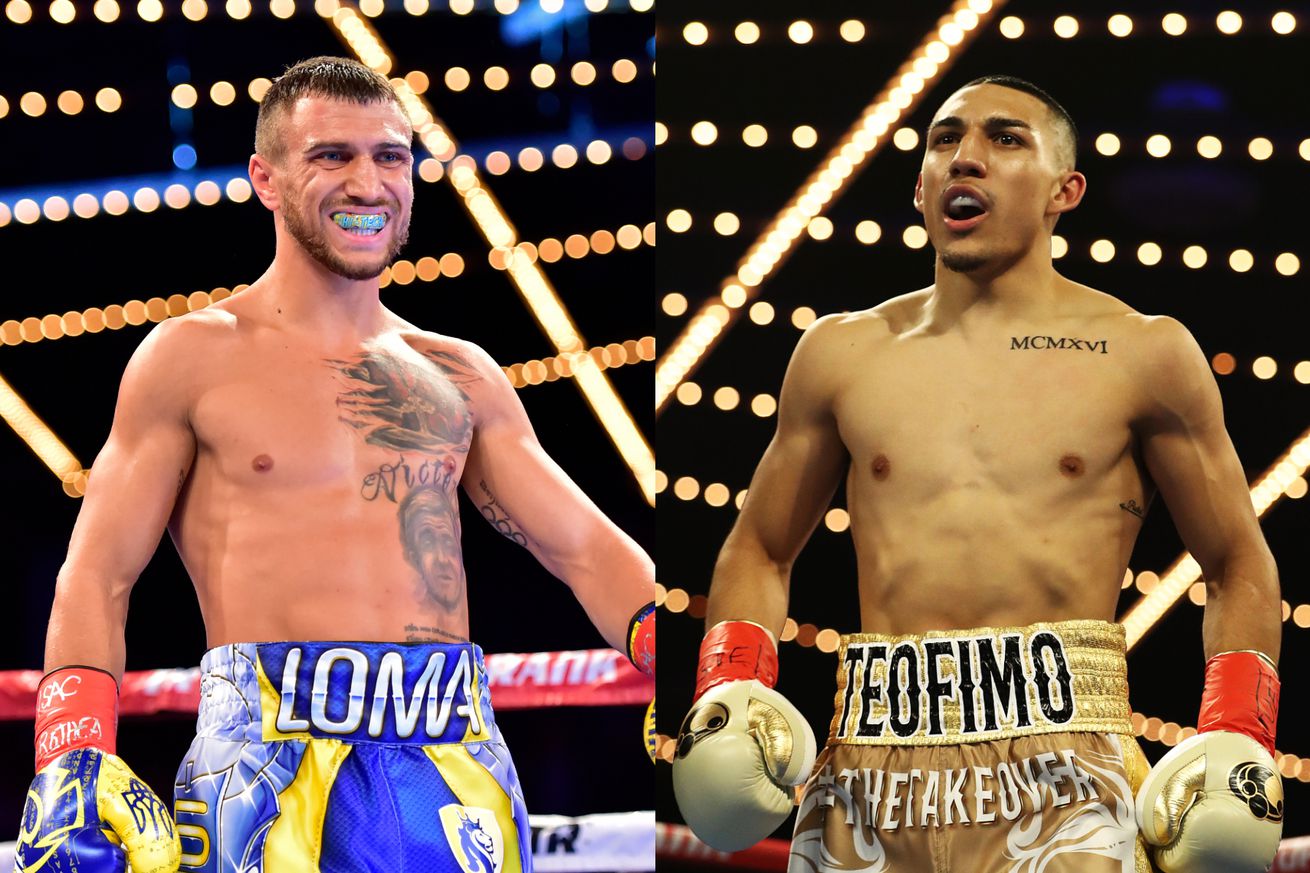 Loma or Lopez? We make our picks for Saturday’s winner.

We’re just a day away now. Saturday on ESPN (10 pm ET), Vasiliy Lomachenko and Teofimo Lopez will end the debates, and one man will walk out with three title belts, a Ring Magazine championship, and a belt the WBC made up. Most importantly, we’ll have a truly clear, no-doubt pick for the world’s best lightweight.

This is the most highly-anticipated fight of 2020 if you’re a boxing fan, a compelling matchup between an already-legendary veteran and a young star making a fast climb. Who wins? You had your say on Tuesday, and now we make our picks.

Lomachenko isn’t old, but he’s definitely not going to be in his true peak form for much longer, if he still really is. Lopez, on the other hand, probably isn’t going to be at 135 much longer; if not for this fight, he might have already gone to 140. So luckily we’re getting this at maybe the only time it can actually happen.

I think Teofimo Lopez is a really good fighter already and has the genuine potential to be great. He’s the bigger man here, the natural lightweight. He’s young, he’s quick, he’s heavy-handed, and he’s got that genuine sort of swagger to him that comes out even in his more quiet moments, when he’s not putting on a trash-talking show. I don’t think he has any fear of Lomachenko or real trepidation about this fight.

If Lopez gets Loma — or anyone — with something big and well-timed, he can absolutely knock him out. But I don’t think he’s going to be able to do it. I think he’ll have some moments, might even drop Vasiliy at some point, but on the whole I think Lomachenko is still just too much of a tactical wizard and technical marvel for Teofimo to get the duke here. If Lopez is going to win, it almost certainly has to be a stoppage, but I think Loma still has the IQ, and most important the incredible foot work and spring in his step to avoid the home run shots. I think he frustrates Lopez en route to a clear decision. Lopez will bounce back and be a force for years, but Saturday will be Loma’s night. Lomachenko UD-12

You know, I actually mostly agree with Teofimo Lopez when he dismisses the comparisons of this fight against Lomachenko to Mayweather-Canelo. This fight really isn’t anything like that one, but there is at least one comparison to Mayweather-Pacquiao that I think is relevant to this fight. Manny Pacquiao is often credited for his footwork and his ability to get angles on his opponents, but back when he was getting ready to fight Floyd I constantly mentioned that while not as herky-jerky fast, Floyd’s footwork was probably even better than Pacquiao’s.

That take drew plenty of criticism at the time, but it proved evident in their fight when Pacquiao wasn’t able to take angles on Floyd where he could get off his best offense because Floyd was able to smoothly pivot and turn with Pacquiao. It’s not anything that will grab your attention on screen, but that one thing can be a huge difference-maker. So bringing this back to Lomachenko-Lopez, I’ll just say superb footwork isn’t something you can easily replicate in sparring, simply because almost no one can emulate that aspect as well as the greats. Lomachenko is one of the greats, particularly in the footwork department, and that’s going to provide a level of difficulty that Lopez has never encountered before. Lopez’s footwork isn’t enough to counteract Lomachenko’s so far as I can tell, so unless Lopez can flatten Lomachenko with a big shot, I see Lomachenko outpointing him over the distance. Lomachenko UD-12

Bulldozing Richard Commey, though an incredibly laudable feat, doesn’t erase Lopez’s struggles with Masayoshi Nakatani. I recognize that Lomachenko isn’t six feet tall, but that fight raised a question that Lopez has yet to answer: we all know how fearsome he is in close quarters, but what happens when he doesn’t get the fight he wants? He couldn’t force Nakatani into the pocket for any length of time, and what Lomachenko lacks in height and length he makes up for in movement and overall craft. He’s not going to oblige Lopez the way Commey did, and considering Lomachenko’s historical success against fast and heavy hands alike, I’m not putting my faith in Lopez leveling him with a stray shot.

Lopez clearly has the potential to be a marvelous fighter, but even putting aside the awe that Lomachenko’s feats inspire, I don’t see him beating “Hi-Tech” unless the Ukrainian tries to prove a point and duke it out in a phone booth. While I think he’s mentally strong enough to avoid saying “no mas,” that just means 12 full rounds of increasingly one-sided action. Lomachenko UD-12

As much as I’ve pumped myself up for this fight over the past week, the cynic in me keeps tapping me on the shoulder and refreshing my memories of Lomachenko. Despite Loma’s lightweight career lacking a few of the fireworks that saw him blitz through the 130-pound division in his very own reign of terror, he’s still passed every test with flying colours, dropping, stopping and hurting a capable string of opposition. This — if we are to believe Loma, Klimas et al — was “Hi-Tech” at a lower spec of around 70%, with injuries and concerns dogging previous camps. If there is a chance that we haven’t seen the best version of Loma yet, then oh boy, stay tuned. He’s operated at the top table for so long now, whereas Lopez is only just pulling up a pew — I am yet to see the proof that Lomachenko is on a slide steep enough to cause him too many concerns, even at his ceiling of the lightweight division. Lopez is young, hungry, powerful but unproven — just five months before decapitating Commey, he struggled with Nakatani over the distance getting caught too easily and frequently.

I really want Lopez to force Loma to go to the well in this fight, but feel his heart may break in the championship rounds once he realises he can’t solve the puzzle. You can’t solve a puzzle with force, and despite the obvious power Lopez brings to this fight, he’s going to struggle to find a home for it. I’m expecting an entertaining opening 3-4 rounds, until Loma canters off into the sunset, reminding us — not that we needed reminding — how great he truly is. Lomachenko UD-12